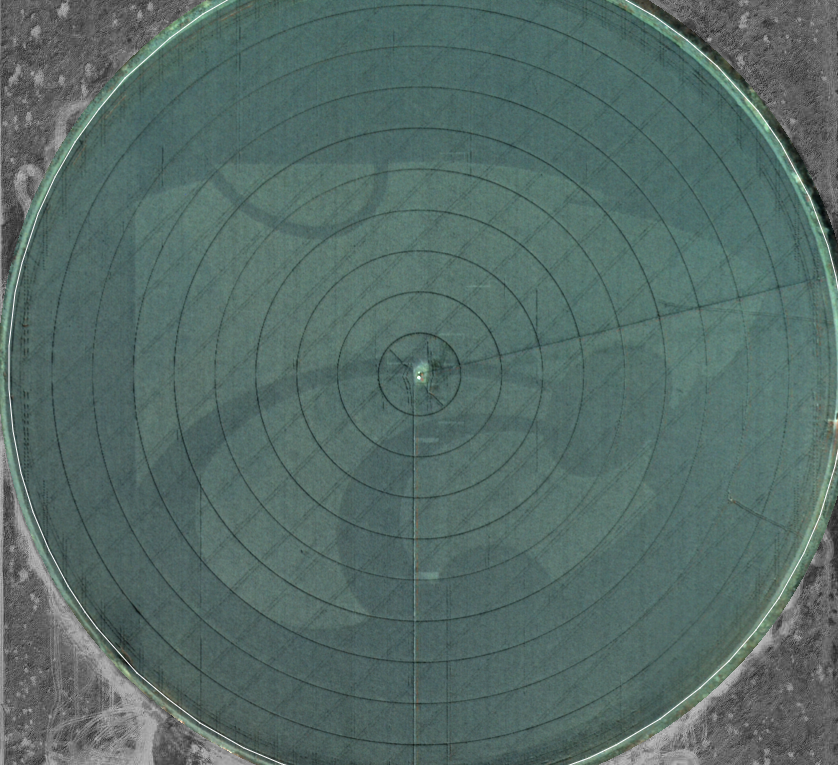 Ormiston Farms of Kismet, Kan. planted a corn variety in the shape of the K-State Powercat. At 2000 feet wide, it's thought to be the largest version ever made of the logo. (Photo courtesy KSRE)

KISMET, Kan. – Folks across the country find all kinds of ways to celebrate their favorite universities and sports teams.

This summer, Rocky Ormiston may have just out-done them all.

The co-owner of Ormiston Farms used precision agriculture technology to plant a hybrid of corn in the shape of the Kansas State University Powercat, which — at 2,000 feet wide — is thought to be the largest version ever made of the popular logo.

Pictures taken several hundred feet above the field show a perfectly groomed Powercat inside a 125-acre circle that measures one-half mile wide. “The Powercat covers about 40 acres of that circle,” Ormiston said.

Today’s precision agriculture machines allow farmers to plant multiple varieties of farm crops in one pass, depending on the farm soil or other factors. In the case of Ormiston’s Powercat, he used the technology to plant one corn variety in a very precise pattern, and then used a different variety for all other parts of the circle.

The two varieties have different colored tassels, creating a color difference between the larger field and the Powercat, “measured right down to the inch,” Ormiston said. The image, which represents the university’s Wildcat mascot, is expected to last for about two weeks, he added.

“You assign that Powercat a variety, and the rest of the field gets the other variety,” Ormiston said.

The Ormiston Farm, which manages 7,000 acres of irrigated land, purchased the technology nearly two years ago because their farm’s soil was highly variable.

“This technology was created to plant the best variety regardless of soil type, so you could maximize every acre on that field,” Ormiston said. “Instead of just putting one variety that does average across the entire field, we can plant two varieties that both do well on that field.”

The field where the Powercat was planted was an area where the soil was consistent, Ormiston said. It gave him the opportunity to “just have some fun.”

“We’ve been talking about doing this since we bought the planter,” he said. “I just didn’t want to do it the first year because I wanted to make sure everything was going to work first.”

Ormiston manages the family’s farm with his father, Rock, who also graduated from K-State in 1978 with a degree in agricultural economics. Their farm is located about 17 miles northeast of Liberal, Kan.