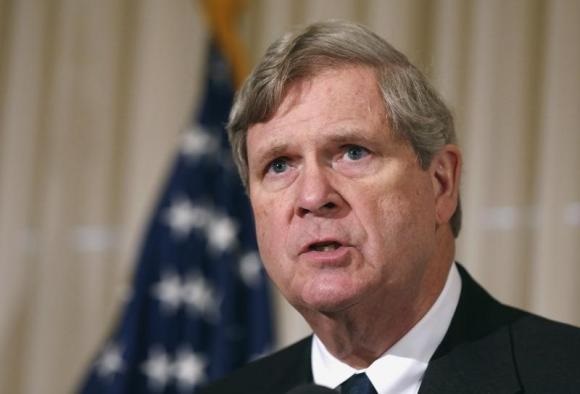 U.S. Secretary of Agriculture Tom Vilsack delivers keynote remarks at the public launch of the U.S. Agriculture Coalition for Cuba while at the National Press Club in Washington, January 8, 2015. CREDIT: REUTERS/LARRY DOWNING

Politico is reporting that Tom Vilsack may be Joe Biden’s number one choice for Secretary of Agriculture. However, the article also says the final decision isn’t made yet.

The Hagstrom report quotes a source with ties to Vilsack, saying, “I think this is still very much in flux.” Vilsack was the ag secretary for eight years when Barack Obama held the Oval Office and Biden was his vice president.

Vilsack is the current CEO of the U.S. Dairy Export Council. His tenure as ag secretary was during a period of record farm income and record export numbers. His Deputy Secretary, Kathleen Merrigan, spearheaded the Know Your Farm, Know Your Food Initiative.

Vilsack, a former Iowa governor , campaigned for Biden during the Iowa caucuses. Republican Grassley says he and Vilsack were last together in the state over the summer…

Vilsack’s USDA helped with the passage of the Healthy Hunger-Free Kids Act, which resulted in rules requiring higher quality meals at U.S. schools. Vilsack also encouraged farm groups to come together on an agreement on the labeling of foods that contained genetically modified ingredients.

Progressives oppose Vilsack getting another chance at the job, saying he’s “too close to agribusiness.” More mainstream farm groups have mostly stayed out of the debate over Biden’s choice for ag secretary, but many in the past praised Vilsack’s work.