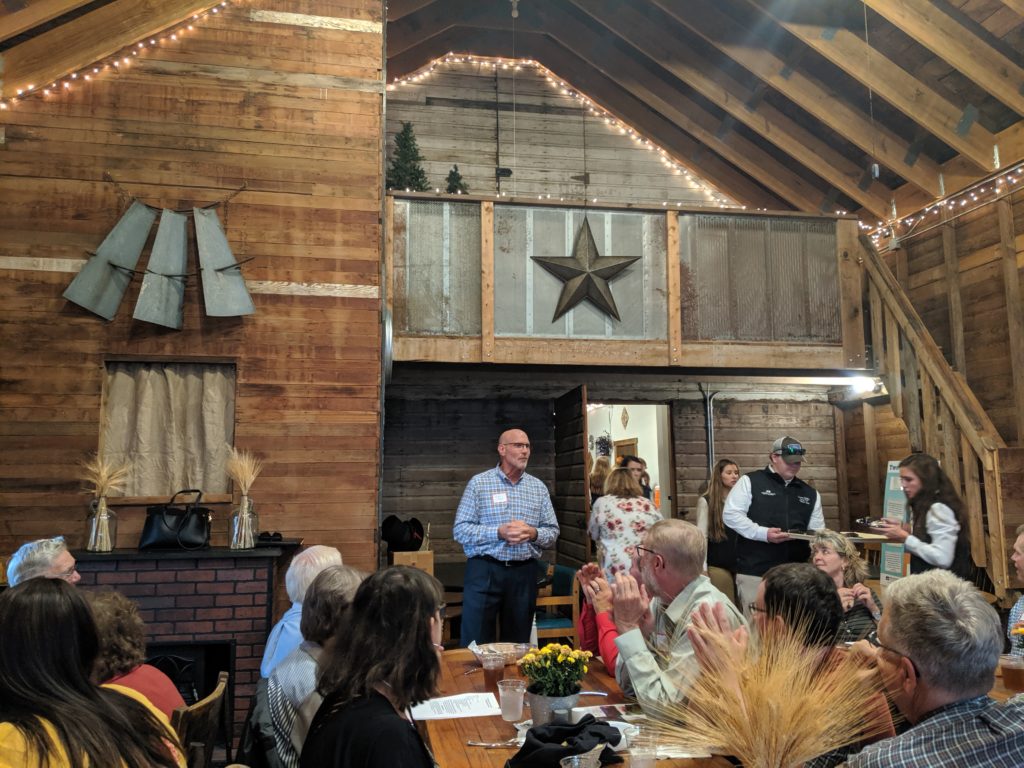 Nearly 60 people turned out to the Old Cozad Mill for the 2019 Dawson County Farm Bureau Annual meeting. Local FFA chapters from Cozad and Lexington helped to serve a pork loin meal from Around the Block Catering while county members enjoyed in the fellowship and friendship just ahead of what is expected to be a busy harvest.

Following the meal President Kerry Barnes introduced the evenings guest speaker Bruce Rieker, Nebraska Farm Bureau Vice President Governmental Relations, to the front of the room. Rieker covered the list of government issues that Nebraska Farm Bureau is currently tracking. Top of the list included defending Market Facilitation Payments or MFP payments to farmers. Rieker pointed out that some outside of the ag industry see the MFP as a government windfall to ag producers, but in reality MFP represents just 25 cents on the dollar of what has been lost due to the trade war. Rieker also highlighted the challenge the ag industry is facing with limited congressional representation.  ” I estimate there are only 35-36 out of 435 congressional districts that have the agriculture production similar to that of Nebraska’s third congressional district.” Rieker told the crowd. On the state level Rieker is somewhat concerned with how common filibusterers are becoming in the Unicameral and that property taxes will again be one of the top priorities Nebraska Farm Bureau fights for in the 2020 session.

The business meetings started up following the guest speaker. First report out was the membership report showing that Dawson County Farm Bureau was at 95% of their membership goal of almost 800 members. The 15th annual Dawson County Farm Bureau Scholarship winners were also recognized. Receiving scholarships included Christian Timm of Eustis/Farnam, Allie Porteniere of Eustis/Farnam and Tennyson Willams of Sumner.

The final report ahead of board elections was the President report which highlighted the local and regional events participated in by Dawson County Farm Bureau. Helping youth in FFA and 4-H were a majority of the events. Board Member Troy Linn worked with Overton FFA and provided financial support for several ag literacy workshops in the Overton Elementary. The biggest youth centered event far and away was again Beef in Schools. 2019 saw Dawson County Farm Bureau and Cattlemen partner together with Tyson to serve over 5,000 students in Dawson County a delicious beef meal.

Just ahead of the meetings adjournment and nights entertainment members voted to peruse two policies at the state level.  The first being to ensure funding was available to AgrAbility in Nebraska. AgrAbility is a national organization that helps to ensure disabled farmers and ranchers have the specialized equipment necessary for them to continue working the land and livestock. Unfortunately Nebraska’s AgrAbility has not had proper funding for multiple months by some estimates in the crowd.

The second policy voted on by the group focused on where tax money should be directed IF medical/recreational marijuana became legal in Nebraska. Members want the tax money, again if, passed in the state to go towards property tax relief.

The evening came to a fun end with entertainment provided by Joe Jeffery. Jeffery has been a long time central Nebraska rancher and veterinarian discussed the many hats he had worn in his life being on various boards and committees. Jeffery then produced a box of hats where he recited poetry, stories and comedic tales to the delight of the audience.