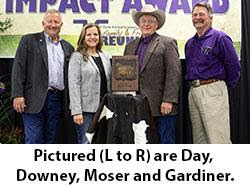 KLA received the Don L. Good Impact Award October 4 during the Kansas State University Animal Sciences & Industry (ASI) Family & Friends Reunion in Manhattan. Presented by the Livestock and Meat Industry Council (LMIC), a cohost of the event, the award recognizes a person or entity that has had a positive impact on the livestock and agricultural industry. It is named in honor of Good, a former ASI department head. According to LMIC board member Justin Janssen, there were many reasons the selection committee chose KLA to receive this year’s Impact Award. Listed among those, Janssen said, was the positive contributions KLA and its members have made to the agricultural industry,at both the state and national levels.
“KLA has had the livestock and meat producer and industry’s best interest at the heart of their mission since the inception of KLA in the late 1800s,” he said. “KLA continues to make an impact daily and certainly fits the criteria for the Don L Good Impact Award.”
The award was presented by K-State ASI Department Head Mike Day and LMIC President Mark Gardiner from Ashland to KLA President Barb Downey of Wamego and KLA President Elect Harry Moser from Wheaton. More than 1,300 alumni and supporters attended the event. For photo and video highlights, visit the event’s Facebook page at K-State Family & Friends.