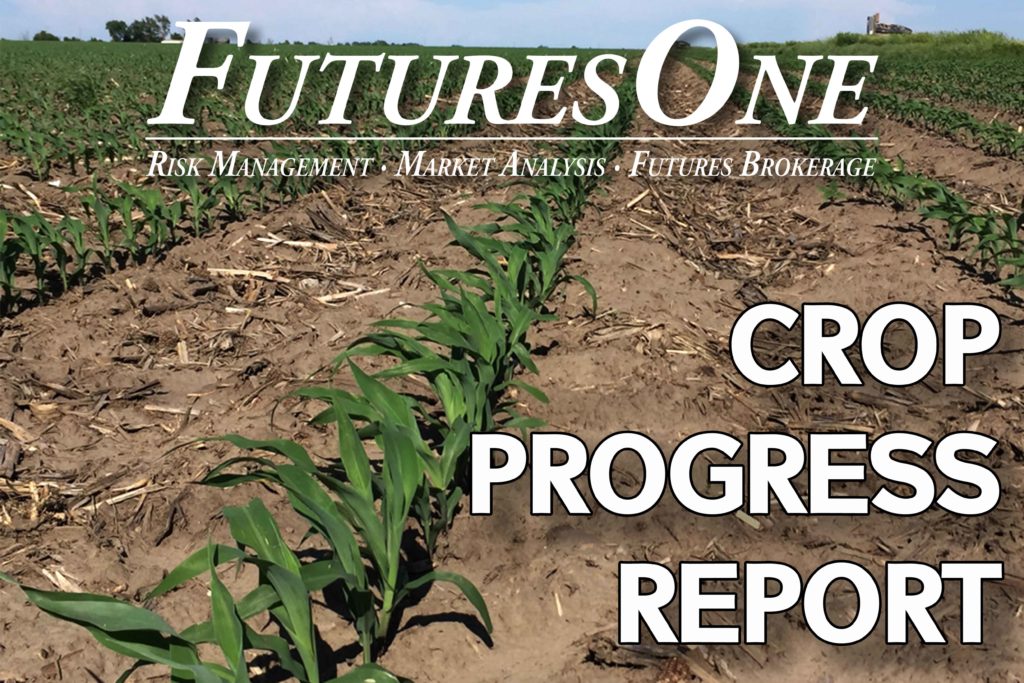 OMAHA (DTN) — The percentage of the U.S. corn crop rated in good-to-excellent condition dropped slightly last week but was still the highest in over a decade, according to the USDA National Ag Statistics Service’s weekly Crop Progress report released Monday.

Listen to the report here: http://post.futurimedia.com/krvnam/playlist/6-11-usda-crop-progress-report-4367.html

NASS estimated that 77% of corn was in good-to-excellent condition as of Sunday, June 10, down 1 percentage point from 78% the previous week. That’s the highest good-to-excellent rating for this time of year since 2007, noted DTN Analyst Todd Hultman.

Nationwide, corn planting was all but finished with NASS no longer reporting progress in that category on Monday. Meanwhile, corn emergence, estimated at 94% as of Sunday, was slightly ahead of last year’s 93% and also ahead of the average pace of 92%.

Soybean planting was also running ahead of normal with 93% of the crop planted as of Sunday, compared to the five-year average of 85%. Eighty-three percent of soybeans were emerged, well ahead of the average of 69%.

Like corn, soybeans’ good-to-excellent rating was also down 1 percentage point from 75% the previous week to 74% last week, which tied the same rating in 2016.

Winter wheat was 91% headed, equal to last year and near the five-year average of 90%. Winter wheat condition last week was 38% good to excellent, up 1 percentage point from the previous week’s 37%.

“Winter wheat harvest is making progress, at 14% complete with wheat coming quickly out of Texas and Oklahoma,” Hultman said.

Spring wheat was 94% emerged, the same as last year but ahead of the average pace of 89%.

“Spring wheat’s good-to-excellent rating of 70% is unchanged from a week ago,” Hultman said. “Crops are mostly favorable, but 12% of crops in Idaho are rated poor or very poor.”

To view weekly crop progress reports issued by National Ag Statistics Service offices in individual states, visit http://www.nass.usda.gov/…. Look for the U.S. map in the “Find Data and Reports by” section and choose the state you wish to view in the drop-down menu. Then look for that state’s “Crop Progress & Condition” report.

Find the report at: http://usda.mannlib.cornell.edu/MannUsda/viewDocumentInfo.do?documentID=1048