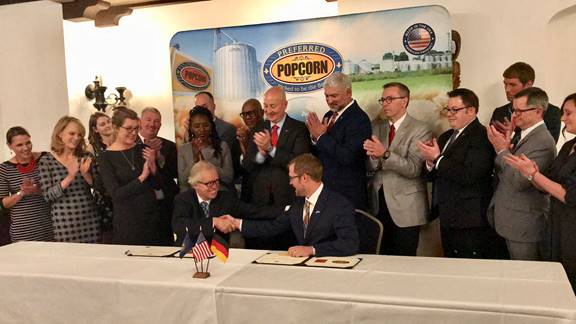 BERLIN, GERMANY – This week, Governor Pete Ricketts is leading a trade mission to Germany to promote Nebraska’s quality ag products and to thank German companies for creating jobs in Nebraska.

The Governor and trade delegation began the mission today in Berlin, Germany where they will meet with government officials and host a reception for University of Nebraska alumni, business officials, and other friends of Nebraska.

Delegates on the mission include representatives from the Department of Economic Development, Department of Agriculture, Department of Environment and Energy, University of Nebraska, Nebraska Farm Bureau, Omaha Public Power District, Greater Omaha Chamber of Commerce, and several ag and manufacturing businesses.

The trade mission began as Preferred Popcorn, a popcorn manufacturer headquartered in Chapman, Nebraska, inked a new trade agreement.  The new agreement grows Preferred Popcorn’s relationship with Germany-based Haase Foods.  Nebraska is the largest producer of popcorn in the United States with over 353 million lbs of annual production.

This is Governor Ricketts’ second trade mission to the European Union (EU) in the last five years and first trade mission to Germany.  Germany is the largest economy in the EU.  This trade mission comes on the heels of a new trade agreement between the United States and the EU that was secured by President Donald J. Trump.  Under the agreement, the EU has agreed to allow the U.S. to almost triple the amount of beef exported to the region.  In 2005, only five percent of the U.S. beef entering the EU came from Nebraska.  By 2018, Nebraska’s share rose to 53%, and was valued at $124.3 million.

Nebraska has one of the highest percentages of Americans of German descent in the United States with celebrations such as Germanfest in Syracuse highlighting the cultural connection.  A full profile of Nebraska’s trade with the EU can be found by clicking here.

ACE statement on 15-year anniversary of the RFS

Rep. Fortenberry signs onto bill that could offer $500 million to fairs

Harvest on the horizon near Henderson, NE | Fridays in the Field | Ep. 11