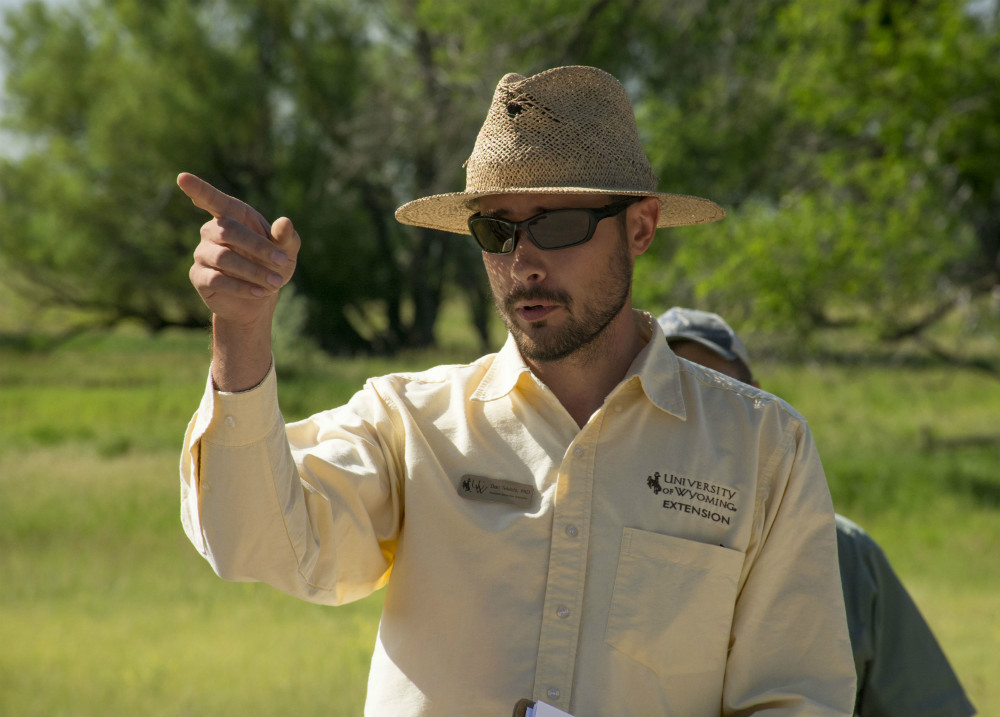 Dan Tekiela at a recent outdoor seminar on the Dalmation Toadflax near Cheyenne, Wyo. Courtesy Photo

Something had grabbed her attention, and she went down to one knee for a closer look. “There,” she pointed to one of the leaves on a plant. A round hole had been bored through, one telltale indication of a Dalmatian toadflax stem boring weevil – Mecinus janthiniformis – at work.

As if coming out from behind a curtain on cue, a little black weevil with legs churning treaded from under a leaf and continued upward, oblivious to humans and going about fulfilling its USDA-mandated biocontrol job of munching and ultimately injuring the invasive plants on the range at the High Plains Grasslands Research Station just west of Cheyenne.

Those attending the Dalmatian toadflax field day earlier this month would later wave sweep nets and sweep the insects off plants. USDA workers used respirators to suck the valuable bugs into small glass jars for attendees to take home and release.

The beetles were only 10 feet away from herbicide trials by University of Wyoming Extension invasive weed specialist Dan Tekiela.

“Herbicides aren’t the only option,” he said. “An integrated approach is appropriate but understand not all management approaches are applicable to all situations. That’s really important.”

Dalmatian toadflax is native to the Mediterranean region (including the Dalmatian coast of the former Yugoslavia) and was intentionally introduced into the U.S. as an ornamental plant in the late 1890s or early 1900s. Tekiela said horticultural reports from 100 years ago state the plant seemed to survive well but wasn’t very pretty.

“That’s such a perfect statement of an invasive,” said Tekiela. “Here we are 100 years later, and it’s one of the more problematic species in the Western U.S.”

The weed hasn’t yet blown to proportions like Canada thistle. Dig a teaspoon of soil anywhere in Wyoming, and Canada thistle seeds are there, said Tekiela. He believes there is an opportunity to slow Dalmatian’s spread because the plant hasn’t advanced that far.

“You can save a lot of money if you don’t let it get to that point,” said Tekiela. “With the increasing density of Dalmatian toadflax is the decreasing density of the other desirable plants you want. Getting those back is hard. Killing a plant is easy. It’s getting what you want there that is hard.”

There isn’t one silver bullet, and thinking about multiple management strategies on your property may lead to the best result, he said. Biocontrol can work in some scenarios but is not feasible in others, Tekiela said. Herbicides may be good options in others.

The herbicide trials showed more than what would wreak havoc on the invasive weed. Tekiela is also interested in knowing and showing how much the surrounding native plant community can benefit from management.

“I can go out and kill plants, make a moonscape out of something, but that’s not what our goal ever is,” he said. “(That goal is) get rid of one plant and keep everything else.”

Dalmatian toadflax has been a focus for Tekiela because it is challenging to manage. He said its waxy coating makes herbicide control difficult. Leaves will even squeak if rubbed together.

“That wax is almost like a protective coating, a coat of armor,” he said, to herbicides.

Not to the beetles.

Adult females lay eggs in the stems in the spring, and the larvae hatch and begin feeding on the inside of a stem. The beetles do not kill a plant but greatly reduce its vigor, according to information from the Colorado Department of Agriculture. After many years, sites have been known to collapse.

Bruce Shambaugh, state USDA Animal and Plant Health Inspection Service director, explained to attendees the process the agency uses for Dalmatian toadflax boring weevil control. The beetles may have had a bit of novelty for attendees: Many probably have applied herbicides but not as many have netted beetles.

The participants could take them home if they provided information about how many beetles were released and where. Tekiela said tracking the beetles will enable better management decisions based on where they have been successful.