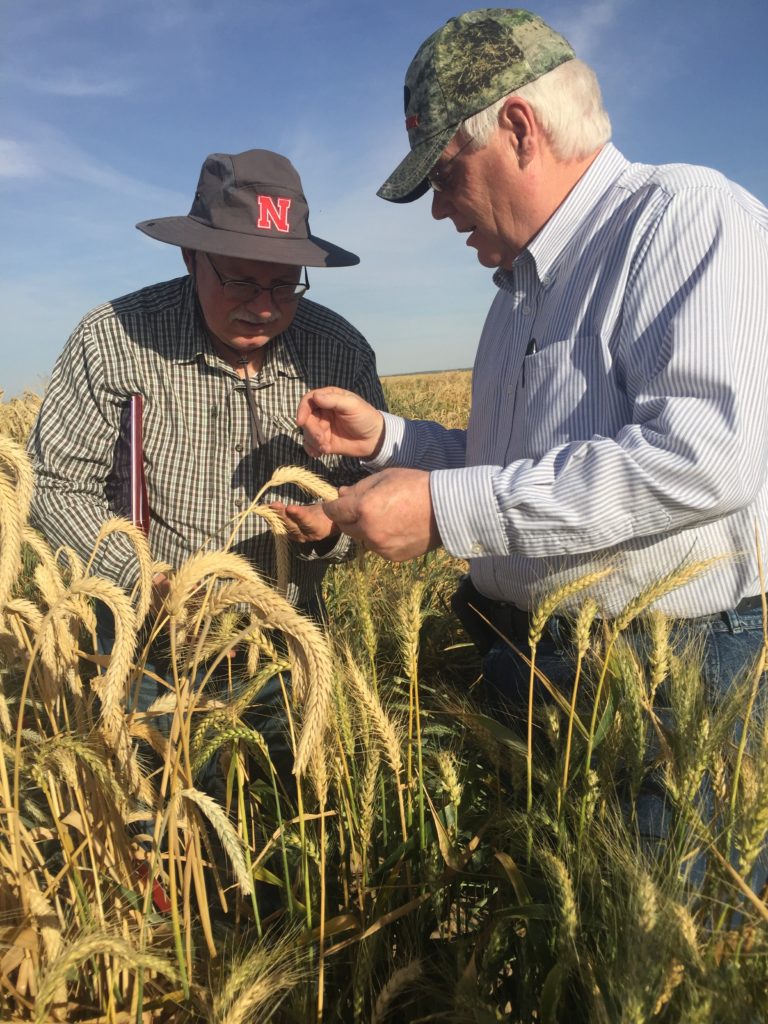 The sun beats down as Jeff Noel stares out at miniature fields of wheat near Yuma, Arizona. These aren’t the sprawling yellow fields of grain from western Nebraska. Each mini field or plot measures less than 75 square feet. As the director of Husker Genetics, part of Noel’s job is production and evaluation of these plots. With 400 plots to walk through, thousands of wheat plants wait to be examined. Hours of work remain to be done. However, Noel isn’t focused on the quantity of labor remaining; he’s focused on the quality of the future. These wheat plants are a bridge bringing new genetics from research at the University of Nebraska-Lincoln (UNL) to wheat farmers across Nebraska and the Midwest. These little plots will eventually become sprawling fields of grain that will feed families around the world.

While Husker Genetics received its current name in 2005, the organization has existed since 1946. Its task has always been the same:  increase breeder developed seed from greenhouse quantities to commercial quantities that can be grown by farmers.

“Part of what we’re doing is making sure a variety can work all the way to commercialization, not just in a greenhouse or a lab,” said Noel.

It’s a task that takes time and commitment. Once a variety has been determined releasable by the wheat breeder, Husker Genetics takes the breeder-developed seed and plants it in “increase” plots. They will take one pound of seed and grow it until they have 20,000 pounds of seed. That seed is divided into 400 units of Foundation Seed. The Foundation Seed is licensed and sold to entities like the Nebraska Crop Improvement Association, Certified Seed growers, or other grain companies. From there, Certified Seed growers will plant the Foundation Seed under strict guidelines and regulations. Their harvested grain becomes Certified Seed. Farmers purchase and plant Certified Seed, then harvest and sell the grain commercially to become bread, pasta, tortillas and other foods to feed families.

Not every variety developed through research makes it to the increase stage with Husker Genetics. According to Noel, part of the evaluation includes ensuring there is a value from the new variety to someone, either producer or end-user.

“Our success is based on their success,” said Noel. “Our biggest customers are the Certified Seed Growers and Nebraska farmers. But the ultimate customer is the consumer. They may not know all the science behind what we’re doing, but they should know we’re providing a support role in ensuring a sustainable, stable and healthy food source is available.”

The science on developing a new variety starts with the wheat breeder. Dr. Stephen Baenziger has been the lead wheat breeder with UNL for more than 30 years. In his opinion, the existence of Husker Genetics and its Foundation Seed Division is vital to the success of his breeding program.

“Husker Genetics’ Foundation Seed Division is the critical link between plant breeders and Certified Seed growers,” said Baenziger. “If it didn’t exist, we would have to contract with a group that increases seed. Usually that would be an out-of-state entity.”

For some, like Certified Seed grower and farmer Larry Flohr of Chappell, Nebraska, the idea of dealing with out-of-state wheat varieties and entities isn’t appealing. After 25 years of selling Certified Seed, he will only use and sell Husker Genetics brand seed.

“I only use Husker Genetics seed because I have observed over the years that it is designed for the varying challenges wheat seed will face in Nebraska, such as our winter conditions, summer heat and drought, late freeze and diseases,” said Flohr. “I have seen other popular seed from other sources have success in our state and area, only to become a disaster when a different year presents a different challenge. Year in and year out, the Nebraska variety will stand the test of time.”

Noel acknowledges one of the values of a state breeding program is its ability to develop varieties adapted to specific parts of Nebraska.

The success of the program and structure are tangible. Since 1986, the UNL breeding program has released 36 wheat varieties. In 2017, those same wheat varieties had a $44 million impact for Nebraska farmers.

Dr. Baenziger said Noel is an important part of that success. “Jeff is respected throughout the industry and by producers,” said Baenziger. “He has numerous contacts that expand our reach far beyond the borders of Nebraska for the benefit of our program.”

Noel, however, attributes the success of Husker Genetics to the dedication of the staff. In addition to Noel, four other members work in the Husker Genetics facilities, including one employee who has served the organization for 50 years. “They’re the ones who make it work,” said Noel.

Flohr said producers should appreciate having a breeding program and Foundation Seed Division that work so well together.

“Our Nebraska breeding program understands the needs of our wheat producers’ growing conditions and designs varieties for them,” he said. “Jeff and Husker Genetics have kept the overall goal of providing and promoting quality wheat seed to Nebraska wheat producers a top priority. What more could Nebraska wheat farmers ask?”

Pursuit Leads to Arrests after Suspects Hide in Cornfields near Kearney