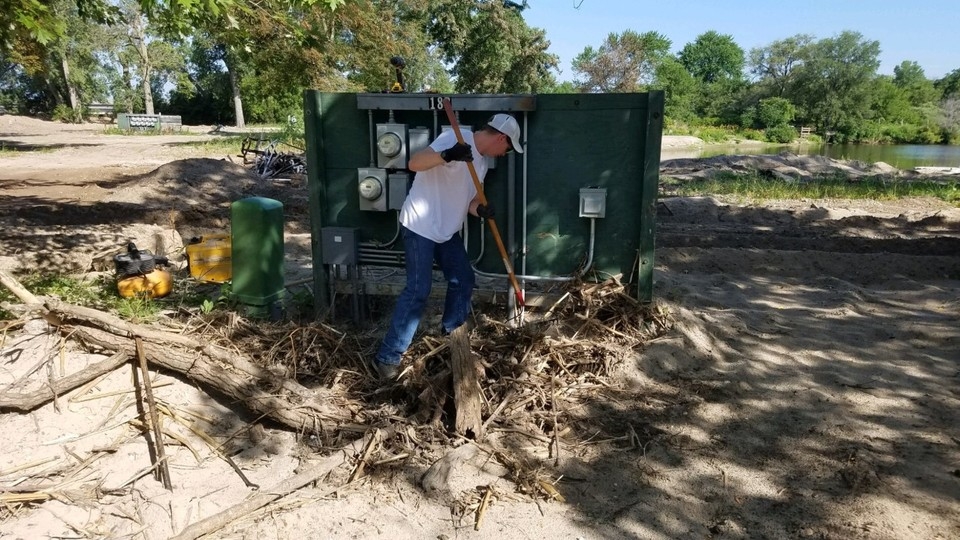 Ben Rhodes, a senior math and political science double major from Gretna, Nebraska, helped clean up flood damage at Linoma Beach this summer as part of a University of Nebraska serviceship. (Courtesy IANR)

This summer, through a University of Nebraska serviceship program, several Huskers helped play a role in that healing process. The work included cleaning up debris, documenting road damage and educating survivors on how to protect their homes from mold.

“I know that I definitely would not be the person I am today without rural Nebraska,” said Tayte Jussel, an advertising and public relations major from O’Neill who participated in the program. “Being able to help the state that I love is really fulfilling to me.”

Jussel spent the summer working for the Nebraska Holt County Extension Office and Central Nebraska Economic Development District. During his internship, he developed educational materials on how to identify and treat mold in flood-affected homes. He got for the idea for the project, he said, after attending several emergency meetings and realizing how widespread the problem was.

“They were telling me about how there’s mold everywhere in those houses, and so what I wanted to do was give people information about mold, how you get rid of it and how it can affect your health negatively,” Jussel said.

Ben Rhodes, a math and political science major from Gretna, also helped with flood recovery efforts this summer. He spent the past several months repairing extensive flood damage at Linoma Beach, a campground area near Ashland.

While the intense, physical labor of the job challenged Rhodes, he was grateful to see his work transform the area and enjoyed how the position expanded his worldview.

“The impact I’ve seen has been not only on the Linoma Beach site, where our progress is daily and concrete, but also within myself. I have developed a newfound appreciation for the mechanisms of disaster relief and those who operate at these areas,” Rhodes said.

Rhodes’ duties included picking up driftwood and debris from the beach, removing rotted flooring in cabins, sweeping up dirt and mud, and assisting an electrician with destroyed power lines and electrical boxes. He said that being assigned tasks he had no prior experience with, then problem-solving his way to fix them, was one of the most satisfying parts of his summer.

“This has been the most difficult job I’ve ever had, and the most fulfilling,” he added.

Taylor Wilke, a sophomore agricultural leadership, education and communication major from Columbus, agrees that the flood serviceship program was a meaningful experience. Wilke was an intern at the Columbus Highway Department and helped document road damage so the area could receive Federal Emergency Management Agency aid.

Over the course of the summer, Wilke worked on around 200 road projects. The job kept her busy, but the knowledge she was helping her neighbors and contributing towards her town’s recovery made it all the more worthwhile.

“I find this job super interesting, since it deals with the roads that I drive on every day,” she said. “I definitely feel accomplished when I leave.”