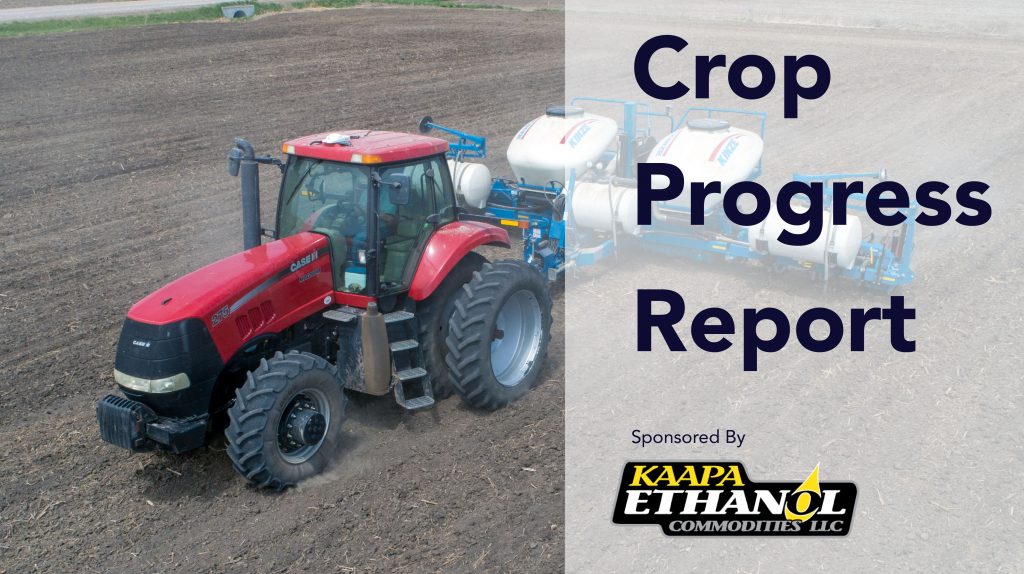 Winter wheat is rated at 62% good to excellent equal with a week ago.

It’s the second crop progress report of 2020 and the first one to show the early corn planting progress across the US. As expected Nebraska has yet to put a recorded seed in the ground. This is right in line with the 5 year average which is at 1%. Kansas has a little bit of a start to corn planting at 6% compared to the five year average of 10%. Texas is by far the furthest along at 63% planted 10% ahead of the five year average. The cold snap that is impacting the plains could impact some of the more northern planted corn if temperatures continue to cool to below freezing at night.

Speaking of the cold temperatures traders are keeping a close eye on wheat conditions. Given that the data for this weeks report was collected last week it likely doesn’t take into account the cold temps that hit late this weekend. Sunday into Monday night Amarillo Texas saw a low of 28 degrees. This is critical as wheat in much of Texas, Oklahoma,  and Kansas are at the development stages like joint, boot and even a few heads emerging. Nationally NASS rated the wheat crop at 62% good to excellent equal with the rating a week ago and 2% higher than a year ago. Nebraska’s wheat crop dropped 2% from lasts week to 75% good to excellent. Kansas improved 1% to 50% good to excellent. South Dakota was able to hold onto it’s number one seat in the country for winter wheat with a rating of 81% good to excellent. That was a 2% drop from last week. Washington state closed it’s gap with South Dakota though to 80% good to excellent.

Winter wheat heading is pretty limited at only 6% nationally. Most of that is in Texas is at 35% vs it’s 5 year average of 29%. Kansas and Nebraska have yet to see their first wheat head of the season.

Overall traders may be a little more bearish given the strong wheat conditions, but they know it will take a week to realize the possible freeze damage. Corn planting is getting started, but it’s not a record setting pace so that may help to create some doubt about big corn acres in the US. Going against that though there is a lot of time ahead for planting. For that reason the report may be seen as largely neutral in the short term market trend.