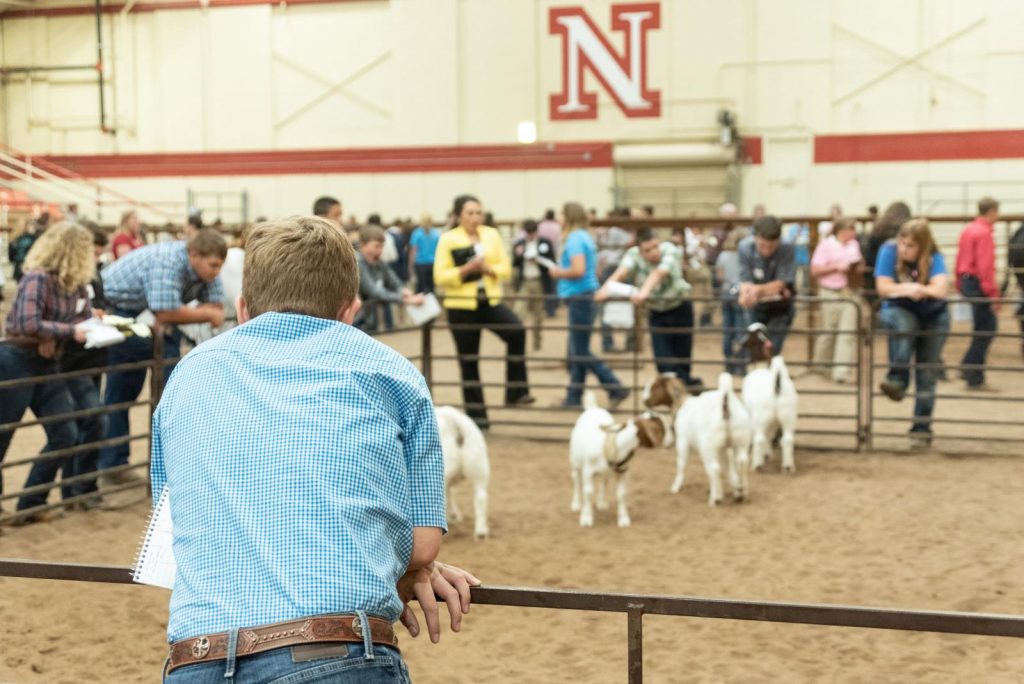 A student judges animals during the Premier Animal Science Event (PASE), a youth livestock judging event, at the R.B. Warren Arena, located on the University of Nebraska-Lincoln East Campus.

The long-standing legend of the University of Nebraska-Lincoln Livestock Judging Team lives on through the hard work and dedication of today’s team members.

The livestock judging team’s roots extend back to1908, and the team’s success built over time, culminating in national championships in 1917, 1924 and 1949. The legendary coach R.B. Warren, who later became the namesake for a livestock judging arena at UNL, set an example for current coach Blaine French, an assistant professor of practice in livestock evaluation and youth programs.

French came to the University of Nebraska-Lincoln understanding the legend of the program and with ideas about how to continue it. He instilled a competitive spirit in practice when he explained that there were five spots open for students to compete in major contests, and those five spots would never be average or permanent. He set the standard, telling the team they should all be giving 110%, no matter what.

The team’s 14 members took that advice to heart. Last spring, the team placed 10th at the National Western in Denver, Colorado, 4th at the Nebraska Cattlemen’s Classic, 5th at the Iowa Beef Expo and 5th place in San Antonio, Texas. They used the summer to continue to practice and work hard, coming out strong this fall. This fall, the team placed top 10 in performance at Flint Hills, 4th place at the Nebraska judging contest and top 10 as a team in Kansas City, Missouri with Tigh Renken, Nebraska native, placing 6th highest individual overall. At the National Championship in Louisville, Kentucky, the team placed 7th, with Renken earning 3rd individual overall and top 10 in reasons.

The global pandemic this season brought many changes, but one thing that stayed constant was the standard of the team. French’s goal is to bring home a national championship, and he doesn’t see anything standing in their way. The current team of 11 students, who have extreme talent, will begin their season on Dec. 14 with winter workout, an intensive week of judging. French is optimistic the team will thrive this season, as long as members keep the mindset that hard work beats talent.

The lifelong assets gained from being a part of the team may be the biggest reward the students earn. Past team members, many of whom have pursued successful careers in the livestock industry, have gained evaluation skills, made strong connections with teammates and producers and developed a sharp eye for picking out the best group of cattle. In their careers, judging has instilled work ethic, engagement and the ability to make quick, accurate decisions and be able to defend them. French’s biggest hope is students will look back and be thankful they were a part of the team, knowing all they have gained from their hard work.

“I’m here to represent the University of Nebraska in a positive light and my goal is to produce competitive kids and to make this program as competitive as we possibly can,” French said.