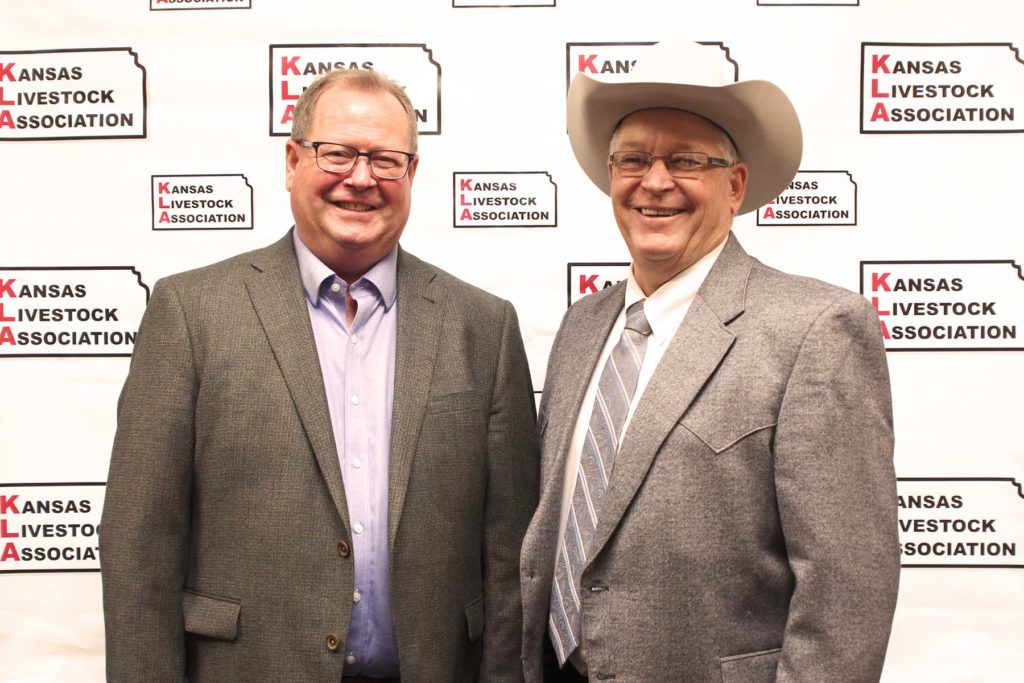 Members of the Kansas Livestock Association (KLA) elected Wheaton cow-calf producer Harry Moser as president during the group’s annual business meeting December 6 in Wichita. The membership chose Jerry Kuckelman, a cattle feeder from Manhattan, as KLA president-elect. Moser and Kuckelman will lead the 5,600-member organization during the next year.

Moser and his family own a seedstock and commercial cow-calf enterprise in Marshall and Pottawatomie counties. Seedstock is merchandized by private treaty, with steers finished on the ranch and sold through a niche market. The cattle graze primarily on native Flint Hills pastures. All the feed for the cattle is grown on the ranch.

Moser Ranch won the Beef Improvement Federation (BIF) Seedstock Producer of the Year award in 2003. The ranch was selected as Outstanding Stockman for 2012 by the K-State Block and Bridle Club.

He is a second-generation cattle producer. His parents, LaVerne and Elaine Moser, moved to town in October after 61 years of life together on the ranch they purchased in 1958 near Elgin, ND, where Harry grew up. The North Dakota ranch remains in the Moser family. The third generation of Mosers is living and working on the Kansas ranch, with the fourth generation learning alongside their parents and grandparents. Moser, his wife Lisa, son Cameron and his wife Carrie, are involved in the day-to-day ranch operations. Daughter Kendra Michaelis is the office manager for Crist and Pieschl Rehab in Marysville, and her husband, Rex, is a crop adjuster for RCIS. Daughter Kayla Josefiak and her husband, Ty, farm and ranch in Pawnee County, where Kayla currently serves as KLA county chair. Harry and Lisa have nine grandchildren.

He currently is serving on the Nemaha-Marshall Rural Electric Association Board of Directors. Harry and Lisa were 4-H beef leaders for three years in Jackson County and 17 years in Pottawatomie County.

Moser graduated from North Dakota State in 1981 with a bachelor’s degree in animal sciences & industry.

Kuckelman is the president and chief executive officer of Innovative Livestock Services (ILS), which consists of eight feedyards in central Kansas and south central Nebraska and an extensive farming operation. He began his career as a cattle buyer for IBP, then transitioned into feedyard management where he spent 27 years, with most of that time as manager of Fairleigh Feed Yard in Scott City.        Kuckelman joined ILS in early 2011 as chief operating officer.

He grew up on a diversified farm near Baileyville that involved cattle feeding, dairy and hog operations. Today, he and his wife, Linda, reside in Manhattan. The couple have three grown daughters. Jill Miller and her husband, Justin, live in Kansas City, KS; Kelsey Kuckelman also resides in Kansas City, KS; and Amber Kuckelman lives in Dallas, TX.

He was introduced to KLA in 1985 when he was elected as Scott County KLA director. Since that time, Kuckelman has held various positions within the organization. He currently is a member of the KLA Board of Directors and the KLA Risk Management Services Safety Committee. Kuckelman served as chairman of the KLA Cattle Feeders Council in 2017 and is a past member of the KLA Executive Committee. He also previously has represented KLA on the NCBA Board of Directors. In addition to his service to KLA and NCBA, he currently is a member of the Livestock and Meat Industry Council.