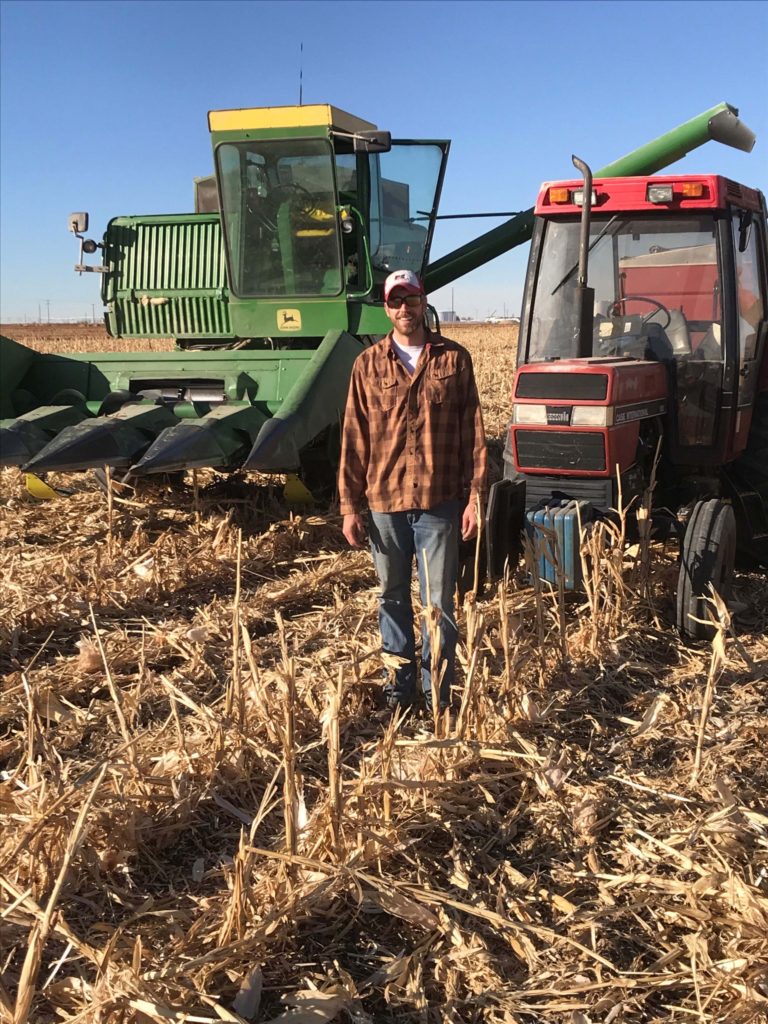 Ross Steward harvests corn at the USDA-ARS Limit Irrigation Research Farm near Greeley, Colorado. The native of Littleton credits trips to his grandparents’ farm and his college years, both in Nebraska, for a career path in crop management. Courtesy photo

Since graduating in 2016 from the Nebraska College of Technical Agriculture in Curtis and three years later from Colorado State University, Steward now oversees a 40-acre research facility in northeastern Colorado.

He is employed by the United States Department of Agriculture—Agriculture Research Service—Water Management and Systems Research Unit based at Fort Collins. Steward works closely with research scientists while managing the USDA-ARS Limited Irrigation Research Farm near Greeley.

Before joining LIRF, he had received an Associate of Applied Science degree in Agronomy at NCTA, then his bachelor’s in Agronomic Production Management at CSU.

Steward says his foundational experience at NCTA was instrumental to his career success after pursuing a childhood interest in agriculture.

“I am unique in the fact that I was born and raised in a large city (Littleton) detached from daily agricultural production. My interest in agriculture stemmed from many childhood visits to my grandparents’ farm in Gering. From those trips I knew I wanted to start farming,” he says.

“Much of the information I draw upon daily was founded at NCTA. I now have a very in-depth understanding of crop production, plant development, soils, mechanics, and chemical application that I rely on to successfully run a research farm and to communicate with scientists,” Steward explains.

“The depth of hands-on practical experiences at NCTA gave me a great base to build upon in my higher level classes at CSU.”

Initially, he considered earning a two-year degree to get into the work force faster.

“NCTA more than prepared me for any job in the agriculture industry, however I did decide to further my education, which provided many other beneficial experiences,” Steward said.

While at NCTA, he had a summer internship as a crop consultant for Panhandle Coop in Scottsbluff, Nebraska.

“This internship was very beneficial.  It put into practice what I was learning in class and crops judging, which is designed to emulate the skills needed to be a certified crop advisor,” Steward says.

That on-farm advising and his studies paid off.

“Interning for a cooperative was also a great opportunity to see many different farming operations and meet different producers.  Exposing myself to what worked and didn’t work for these producers expanded my ‘dictionary’ of farming practices.”

Another highlight at NCTA was participating on a national championship crops judging team.

“Having a solid relationship with my instructor allowed me to become more familiar with his teaching style and allowed for more participation in class. Many classes felt more like a discussion rather than a lecture,” he adds.

“However, like any school, it is what you make it.  NCTA can be a great experience and provide a phenomenal education if you are willing to work hard and push both yourself and your school to always keep improving.”

His advice to college-bound students?

Steward quotes TV host Mike Rowe of “Dirty Jobs” — “Don’t follow your passion, but always bring it with you.”