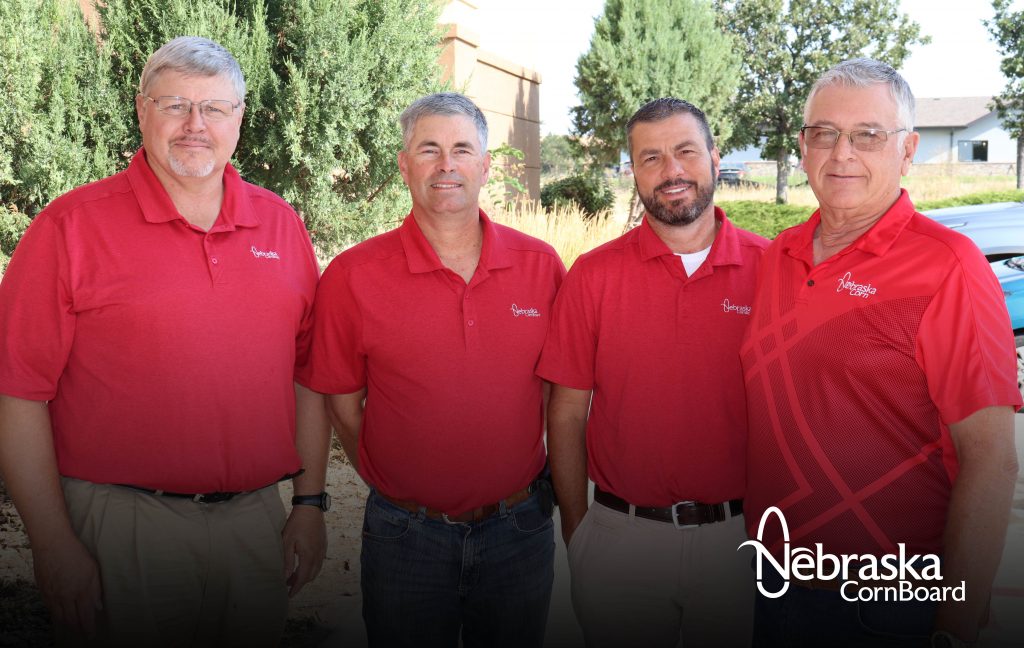 Photo Caption: The Nebraska Corn Board elected its leadership team during its August board meeting in Scottsbluff. From left to right: Dave Merrell (past chairman), Jay Reiners (secretary/treasurer), Brandon Hunnicutt (vice chairman) and David Bruntz (chairman).

SCOTTSBLUFF, Neb. – The Nebraska Corn Board (NCB) elected four farmers to serve leadership roles at its August board meeting. The leadership roles are effective immediately and are yearlong in duration, with the possibility to be reelected.

David Bruntz, District 1 director, was reelected as chairman of the board. Bruntz has been farming for more than 40 years near Friend. He grows corn and soybeans, and he also feeds cattle. Bruntz received a degree in production agriculture from the University of Nebraska-Lincoln’s (UNL) Nebraska College of Technical Agriculture. He has been with the board since 2013.

Brandon Hunnicutt, District 3 director, was reelected as vice chair of NCB. Hunnicutt farms near Giltner with his father and brother. On his farm, Hunnicutt grows corn, popcorn, seed corn and soybeans. He earned his bachelor’s degree in agricultural business from UNL and has served on the board since 2014.

Jay Reiners, at large director, was reelected secretary/treasurer of the board. Reiners farms near Juniata, where he grows field corn, seed corn and soybeans. He has been farming for over 30 years and is the fourth generation managing the family farm. He graduated with an associate’s degree in general

Dave Merrell, District 7 director, will continue his role as past chairman of the board. Merrell has been farming for over 30 years near St. Edward. His family farm produces corn and soybeans. He earned his undergraduate degree in mechanized agriculture from UNL. He has served on the Board since 2006.

“We are very fortunate to have a dynamic group of leaders serving our state’s corn industry,” said Kelly Brunkhorst, executive director of NCB. “Through the guidance of this leadership team, in addition to the expertise and diversity of our full board, we’re well positioned to aggressively tackle our mission of promoting the value of corn by creating opportunities.”

The full board is comprised of nine corn farmers from across the state. Eight members represent specific Nebraska districts and are appointed by the Governor of Nebraska. The Board elects a ninth at large member. Board members serve three-year terms with the possibility to be reappointed.