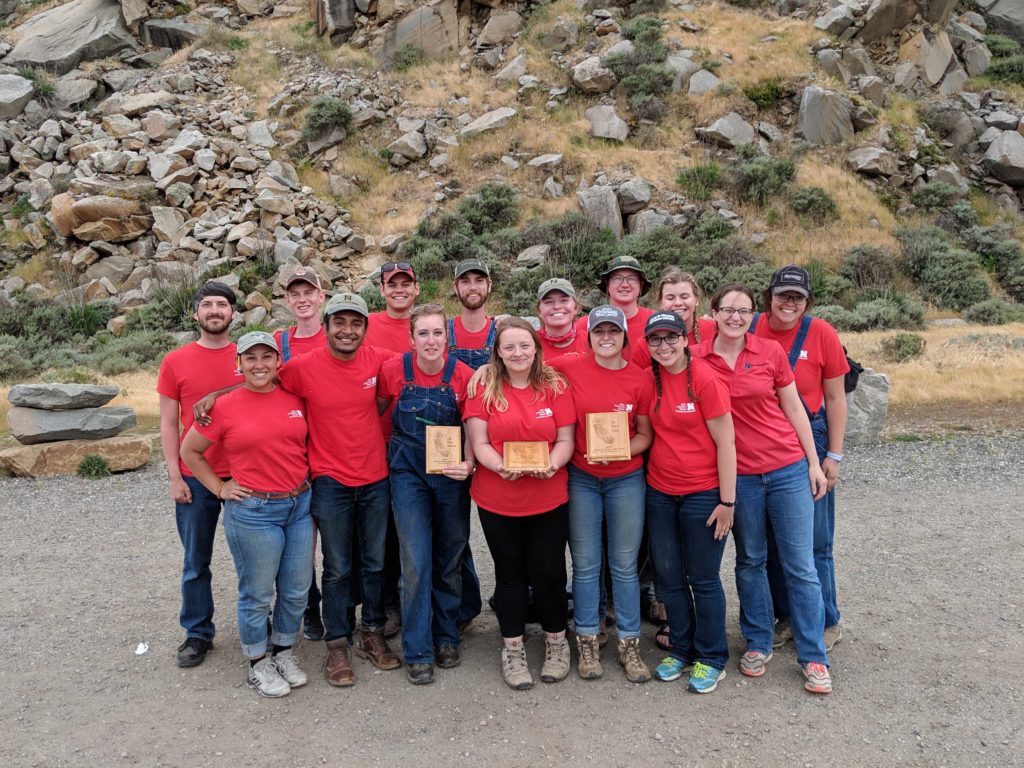 The UNL Soil Judging Team after their third-place finish at the national competition in California. | Courtesy

For the first time in their history, the University of Nebraska-Lincoln Soil Judging Team earned third place overall at the National Collegiate Soils Contest, this year hosted April 14 to 19 at California Polytechnic State University in San Luis Obispo, California.

The team, made up of students from the School of Natural Resources and the Department of Agronomy and Horticulture, also walked away with a first-place group finish, beating out the 25 other collegiate teams, and Samantha Teten, a senior agronomy major, placed 10th out of 101 competitors in the individual competition.

“There is nothing better for learning about soils than getting this experience in the field,” said Judith Turk, team co-coach and pedologist with the Conservation and Survey Division at SNR. “Soil judging gives students a chance to see firsthand the amazing variability of soil across the U.S. I am so proud of their accomplishments!”

Co-coach Rebecca Young, assistant professor of practice in agronomy and horticulture, echoed that sentiment. “The team put a lot of time and effort into practicing and learning about the soils throughout the semester, and their determination to finish strong this year really showed,” she said, adding that the seniors on the team got to round out their time as soil judgers on a high note.

The 14 teammates had four days to prepare for competition, utilizing practice pits to become familiar with the soils and landscape of California. On competition day, they had to correctly identify, evaluate, classify and describe five soil profiles in previously unseen soil pits and also rate the area for land use.

The results were welcome. The team has earned medal positions only twice during nationals since their inception in 1983: once in 2013 in the individual contest, when Craig Teten, Samantha’s brother, earned third place; and once in 2015 when they placed third in the team contest and ninth overall.
For Turk and Young, this year’s performance puts a first-place win in sight in the near future.

“I guess I’m a little competitive,” Turk said, “because I’d really like to see UNL earn first place someday and take home the big trophy. We were just 10 points behind the top team this time, so we are almost there!”

Turk said the team had a couple of advantages going into the competition this year. University financial support ― from SNR, AgroHort, the College of Agriculture and Natural Resources and the Institute of Agriculture and Natural Resources ― meant the entire team competed instead of just the top four individuals; this allowed her and Young to identify each students’ strengths and assign competition tasks based on those skills.

“We did a have one major disadvantage, which was that Becky had to cancel her plans to attend the contest due to a family emergency,” Turk said.

But the students stepped up to plug the gap. In addition to competing, they helped drive competition vans; plan meals; conduct head counts; make decisions about group judging assignments; and manage social media (Didn’t know the team had a Facebook page? Follow it here.).

“Co-curricular activities such as the UNL Soil Judging team not only augment student knowledge about soils at the landscape level, but also help build leadership, team work, and collaboration,” said Martha Mamo, department head of agronomy and horticulture.

“Our UNL Soil judging team is a group of dedicated students who showed on a national stage real grit,” added John Carroll, SNR director, “and their success is a testament to coaches Judy and Becky.”

The team is not reveling overmuch in the glory they deserve. Instead, they’re already looking to the fall and the next regional competition, to be hosted in Nebraska. They’re hoping for another win and another national competition. And maybe a bigger trophy.

Petersen, Strand, Teten and Grint competed in the individual contest based on scores achieved during the practice runs, as well as on their performance at regionals in Fall 2018. All students competed in the group competition.

To join the team, students must enroll in NRES 279: Soil Evaluation, a one-credit class offered each fall semester. Students can take the course up to three times while pursuing a degree.