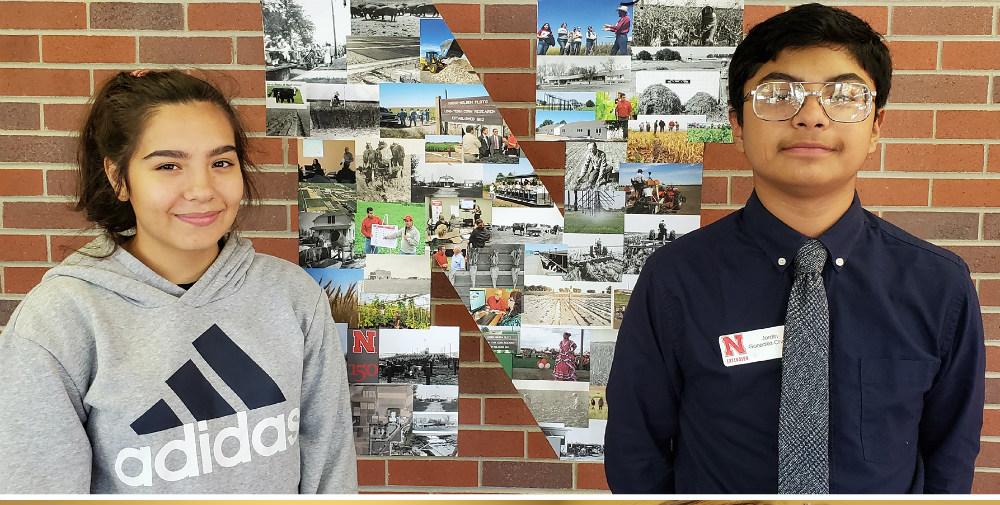 Four high-school students from Scottsbluff and Bayard are spending their summers teaching elementary students, and in the process learning a few things themselves.

They are participants in the Teens as Teachers program, sponsored by Nebraska Extension and in its third year in Scotts Bluff, second year in Morrill, and a handful of other counties in Nebraska.

Neb Extension Educator Jackie Guzman and Extension Assistant Leo Sierra coordinate the program locally. Sierra said the goal of Teens as Teachers is to provide positive learning experiences to under-served audiences by youthful teachers who look like them. The lessons relate to at least one of the program areas stressed by 4-H: preparing youth to make decisions for today and the future; engaging youth in STEM (science, technology, engineering, and math) and agriculture; and empowering youth leadership and entrepreneurship.

The program started with a grant from UNL. Now in its third year, it relies increasingly on local funding sources. Scotts Bluff County 4-H Council is sponsoring the Scottsbluff teens in 2019. In Morrill County, funding is from Nebraska Extension and Bayard Public Schools. Sierra said he is grateful for the support.

The teen teachers have had a busy June and July. The group attended several days of training in Lincoln. Researched and developed lesson plans along with 4-H curriculum.

The students taught six lessons over a two-week period at Roosevelt Elementary in Scottsbluff or Bayard Elementary.

Sierra said the teens brought ideas for lesson plans to him, and he helped them build the ideas into lesson plans with specific topics and keywords. Before they taught, the youthful teachers needed to get the necessary materials, supplies, and also make prototypes of items that they would be creating with the elementary students during the hands-on sessions.

“We want lesson plans to be fun, but also educational for students,” he said.

One of the teen teachers, Alazay Trevino, a junior at Scottsbluff High School, developed lessons related to tornadoes to share with a group of students at Roosevelt Elementary. One lesson was “tornado in a bottle,” which uses large beverage bottles, water, and glitter to create vortexes, so the students can visualize the effect that tornadoes create in the atmosphere.

Trevino is considering options for after she graduates in 2021. Two possibilities are law and veterinary school. She said choosing will not be easy because she has broad interests.

“No matter what I study, it will have something to do with kids,” she said.

Jordin Gonzalez Chavez, also a junior at Scottsbluff High, developed and taught a series of lessons related to robotics. In one lesson, he helped the elementary students build a cardboard robotic arm.

He hopes to study mechanical engineering in college, possibly at the University of Nebraska-Lincoln. After college, he might enroll in the U.S. Air Force.

Two of the teen teachers this year were based in Morrill County. Kassi Garza, who will be a senior at Bayard High School, developed and taught lessons at Bayard summer school around marine biology and its importance. One of Garza’s dream is to be a marine biologist.

After high school, Garza plans to attend WNCC to take her general classes while deciding whether marine biology will be her eventual career path or another field comes along.

The other Morrill County teacher was Adrianna Salazar, also a senior at Bayard High School. She taught a group of lessons centered on art styles and media, in which elementary students got to explore how and why they choose the art they create. Each lesson consisted of a different style and medium.

Trevino and Gonzalez-Chavez both expressed surprise at the amount of preparation needed for each lesson, including finding and buying the materials they would need. Another part of the preparation was making prototypes of any items they would be constructing with the elementary students, so they knew how much time it will take. One of the lessons developed by Gonzalez Chavez had the students building cardboard robotic arms, so before teaching, he had to cut pieces in advance so there would be enough time in class.

The youth have also been assisting with other 4-H summer youth activities, including the Roosevelt-Lincoln Heights Field Day, helping with 4-H mentoring, the Western Nebraska Community College Summer Youth Academy; and have been helping at the Scotts Bluff and Morrill county fairs.

All four of the teens also helped a pair of 4-H interns, Luis Cordova and Hunter Hill, carry out their keystone teaching project, which covered a variety of science and career topics such as cells, electricity circuits, career planning, applying for admission to college, and raising livestock.