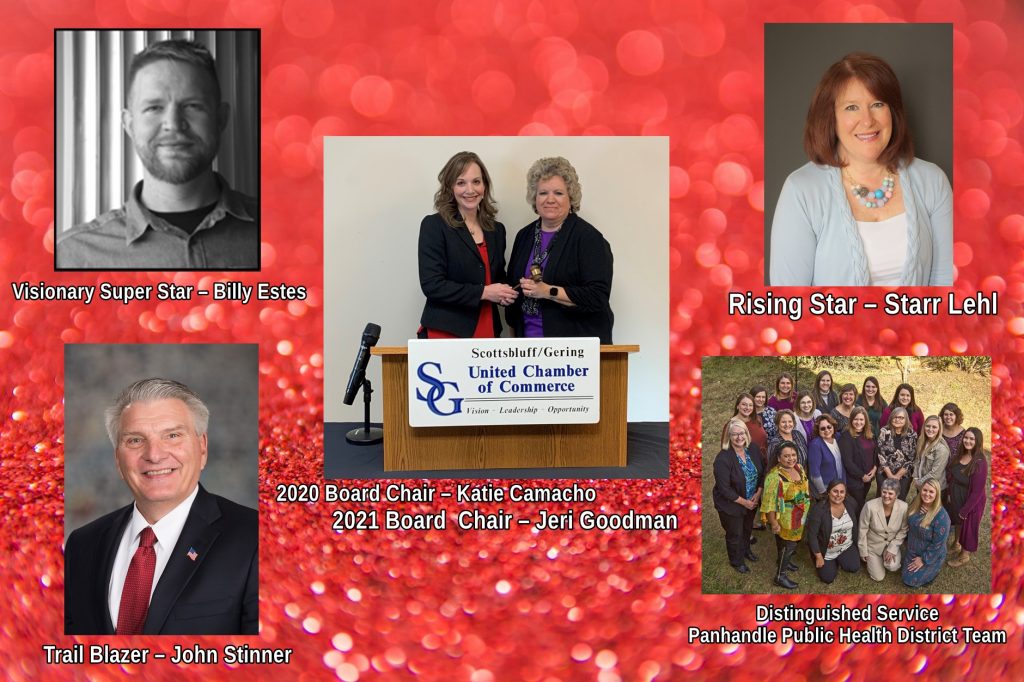 Members of the Scottsbluff-Gering Chamber of Commerce gathered virtually Tuesday to honor those named as Chamber Award Winners for 2020, including a new award for outstanding service.

Nebraska State Senator John Stinner of Gering was honored as the Chamber’s 2020 Trail Blazer, given to an outstanding leader in the community. Stinner is a strong advocate for economic development and has devoted his time to a variety of organizations. He served, as president of Twin Cities Development, was a board member for Gering Public Schools, Terry Carpenter Center, Oregon Trail Community Foundation, WNCC Foundation and the Riverside Zoological Association and a few others too numerous to mention. After his retirement from banking, Stinner began a journey in politics and was elected the state senator for the 48 th District. His financial talents and gifts greatly benefit Nebraska as he serves as the Appropriations Committee Chair. In 2018, he was named State Legislator of the Year. He has received numerous awards by several organizations. The Chamber recognized Stinner in 2000 as a Visionary Super Star and is now honoring him as the 2020 Trail Blazer of the Year.

The 2020 Visionary Super Star is Midwest Theater Executive Director Billy Estes. This past year was challenging for all businesses and Billy did not miss a beat. He collaborated with several businesses and built a team to create a pop-up drive in movie to provide safe entertainment for Western Nebraska. The pop-up quickly outgrew its location at the Legacy of the Plains, and a larger venue was created near the airport. Nebraska 3rd District Congressman Adrian Smith noticed Billy’s fantastic problem-solving skills, and Estes received recognition for the “Excellence in Innovation & Adaptation Award” this past October.

City of Scottsbluff Economic Development Director Starr Lehl was named the 2020 Rising Star. Lehl has been a valuable resource and assists in the collaboration for economic development, tourism and community development. Projects have included Scottsbluff Downtown Revitalization grant for East Overland Business District, five major LB840 projects (with others in progress) which total over $1 million and nearly 100 jobs and she secured the major film production with Street Outlaws in our community. Starr has helped revitalize the Downtown Scottsbluff Association through her leadership and great ideas such as the Thursday Night Food Truck and Bands on Broadway during the summer at the 18 th Street Plaza. She has also helped create a new organization – Community Connections that sponsors events for
newcomers to the community. Her love of people and enthusiasm for our community are contagious. Starr has served our community for over three decades. For the past three and a half years, she had been a true Rising Star.

As the event drew to a close, outgoing chair Katie Camacho announced the Panhandle Public Health District Team as the Distinguished Service Award recipient. Their staff of 23 have kept the community informed of Nebraska state Health Directive Measures and other data to assess procedures to help us all maintain business, schools, churches, and all walks of life. The magnitude of coordination for a centralized information center is overwhelming, but this organization has been impressive. They serve as the Unified Command that bring virtual weekly briefings to the community. Challenges have been numerous through the Pandemic, but their leadership has been excellent. Implementation of a dashboard and the COVID-19 Risk Dial have been an important tool, not to mention the contact tracing, distribution of Personal Protection Equipment, and COVID-19 testing. They served as the liaison for the testing with the Nebraska National Guard test team on
numerous occasions throughout the Panhandle. They are engaged and dedicated and make a tremendous difference during this trying time.

Delivering her parting remarks as chair, Camacho told Chamber members a simple “thank you” seemed inadequate. She said the economic struggles of this last year were unprecedented, and yet, membership levels maintained with retention of 93% and 13 new members joining during the year. Camacho then congratulated Jeri Goodman on becoming board president for 2021. Camacho said Goodman is an incredible leader and human being.
to serve as your Chamber president over this last year.

The awards were announced virtually Tuesday due to pandemic gathering restrictions, with the theme “People & Places: We Miss All the Faces.”