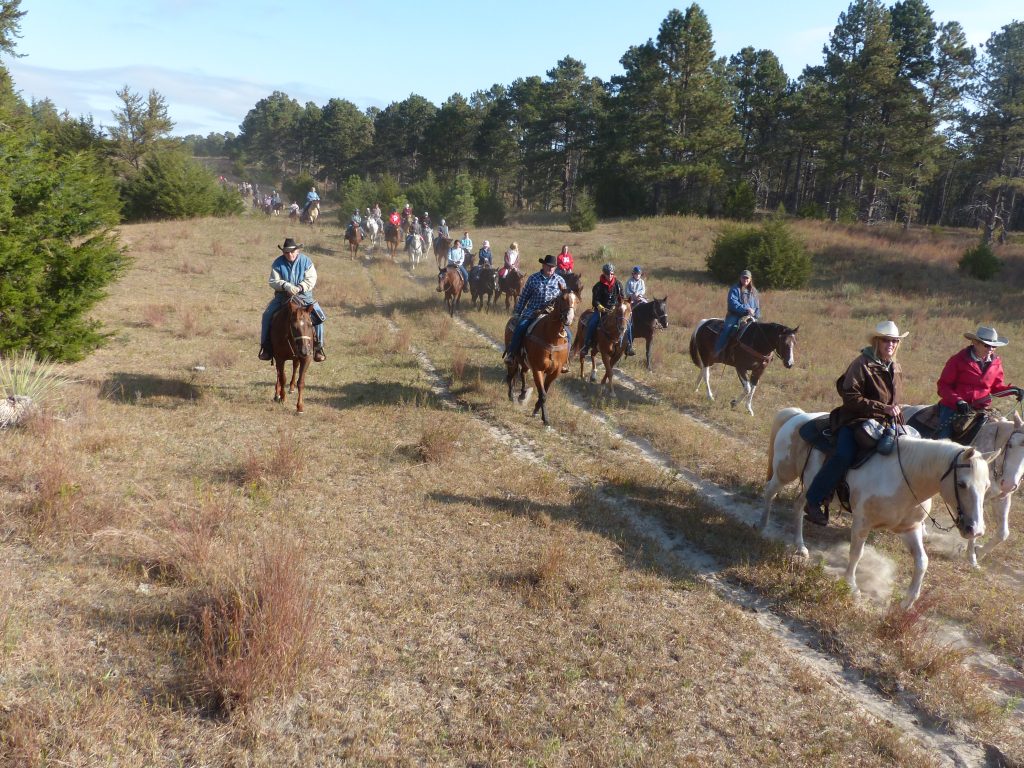 Riders enjoy some of the 90,000 acres of Halsey's forrest the first week of October for the 22nd Annual 4-H Foundation Benefit Trail Ride.

Halsey – A perfect weather weekend both days in Nebraska is rare – winds minimal, temps where jackets are not needed in early fall, even in the morning, beautiful blue sky by day, a fading full moon and bright stars at night – all of this occurred the first weekend in October, 2020 when the 22nd annual 4-H Foundation Benefit Trail Ride was held.

Approximately 120 registrants, with almost that many four-legged horses knew they were coming to enjoy the beautiful fall foliage of the largest hand-planted forest in the Western Hemisphere months and weeks ahead. For many of the owners of the mechanical horses, aka ATVs, this could have been planned a day or two ahead. Either way, riders of both genuinely enjoyed some of the 90,000 acres provided by man and Mother Nature. When meeting, the riders of the mechanical horses observed proper etiquette and shut their engines off while the horses with their riders passed by.

The trail ride has been a labor of love by past and present UNL extension educators. The late Gary Staffer was from O’Neil and his co-trail master, Dewey Teel, Neleigh, now retired from UNL, began guiding the riders that came. The two would come a few days ahead or earlier, map out their routes. Other committee members included the late Ralph Anderson, Buffalo Co. UNL. Anderson was the one always counting the riders out the gate on every ride. Kat Pothoff, Stu Sheppard, 4-H foundation director, Monte Staffer, brother of Gary, and himself an UNL extension educator who retired last year and Bruce Treffer, current Dawson Co. Extension educator also were early committee members. There were others through the years that were part of the early rides, such as Bob and Susan Childers, who brought a team of mules and wagon and gave rides to riderless attendees; Reed and Rosa Lee Hamilton, ranchers north of Thedford, Reed made sure there was certified weed free hay, ( a must on forest service lands). He also had area ranchers bring in their cattle panels, so horses had pens to stay in, which has been a rare bonus of all 22 rides. Rosa Lee, would play the piano or bring her fellow Sandhill Shamrocks band members and entertain in the evening, providing the music for church service on Sunday. Anderson passed away in 2016, Gary passed away a week before the 2018 ride. The Childers both passed within a year and Rosa Lee, past last year, while Reed is in an assisted living unit in North Platte.

Teel turned 75 this year, and announced at the evening meal on Saturday, he will no longer guide the rides. This year, his son Justin, who has come for several years, assisted his Dad in guiding the ride. Carla, Dewey’s wife has always ridden alongside him on these and a multitude of other rides. This year, Justin’s youngest daughter, Riley, a junior at Springview, came, making it a family affair of four.

Treffer and his wife, Christy, until a few years ago, made it a family affair as well. Their young twins, now juniors at Cozad, rode with their parents from toddlers until daughter Sarah reached high school when volleyball has split the family; mother takes daughter to volleyball game, while son Greg comes with his Dad to ride with him and help close gates, as Treffer rides drag, making sure all riders return safely.

Those coming in on Friday, help set up the borrowed panels, then Saturday includes two rides – a two-hour ride in the morning, a longer one in the afternoon. The evening concludes at the 4-H lodge where steaks donated by Tyson of Lexington are grilled and enjoyed by all with 4-H camp staff finishing the meal with potatoes, vegetables, salad and dessert. Donated items from the riders made up a silent auction that bought in approximately $1900, which will be used for camp maintenance and youth scholarships to camp. The cost to ride has never changed – $50 for adults, $25 for 4-H members and youth.

Sunday begins with breakfast at the lodge, church service conducted by Monte Stauffer then riders go back to Windmill 25 where they bedded their horses. Prior to the morning’s ride, the panels are put back on their perspective trailers and the hay is gathered or scattered.

There were many ‘newbies’ on this year’s ride, and a group of 11 Lancaster 4-H members and their leader, Brenda Nepper. Nepper from Hickman arranged only two weeks before to ‘rent’ horses from Dusty Barner and his family, owners and operators of Dusty Trails in North Platte. Gentry Barner, Dusty’s daughter bought a trailer that hauled all 11 horses and the tack. “They gave us a discount for so many horses, which rent is paid by the hours rode,” stated Nepper. The members ranged in age from 12 to 19, and their horse experience varied as well, but no untoward incidents occurred with the group under the watchful tutelage of Gentry. “WE LOVED IT! all exclaimed and plans to return next year are in the making. Nepper was introduced to a three-generation 4-H family from Seward, and another ride out to the forest may be in the offing between them before the 23rd trail ride tentatively slated for October 2, 3, 2021.