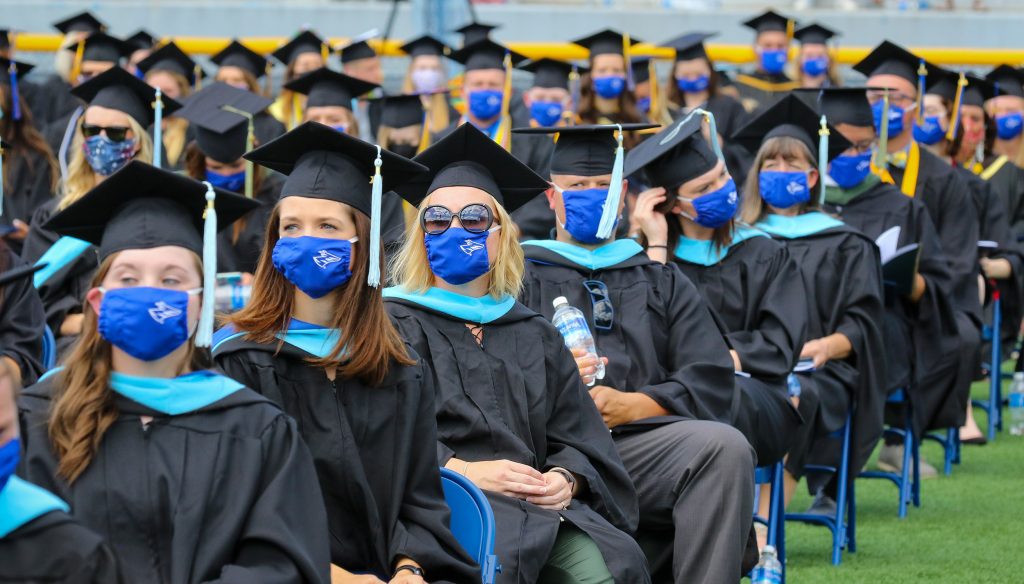 KEARNEY – Rakid Hill has been part of many memorable moments inside Ron and Carol Cope Stadium on the University of Nebraska at Kearney campus.

On Friday, the former Loper linebacker stepped onto the Foster Field turf one more time to celebrate his biggest victory yet.

Hill and more than 350 other UNK students gathered near midfield – where their chairs were meticulously spaced 6 feet apart – to take part in a historic commencement ceremony, one that featured both spring and summer graduates.

The event, hosted outdoors for the first time in 30 years, meant a lot to the Missouri native and his family.

“My mom and dad wanted to see me walk,” Hill said. “I’m their first kid to graduate from a university, so that was big for them. And it was important to me because this is such a special place.”

Hill’s parents and younger brother made the nine-hour trip from St. Louis to watch him receive his diploma.

“They were on the fence about coming, but ultimately it was just bigger than what’s going on. This is a time to celebrate and not be so stressed,” said Hill, who earned a bachelor’s degree in general studies.

After the coronavirus pandemic forced UNK to finish the spring semester remotely and postpone its May commencement, Chancellor Doug Kristensen was more than ready to lead a “normal” event on campus.

“You don’t know how long I’ve waited to do this,” he told a socially-distanced crowd gathered inside Cope Stadium.

Although the event included a few notable changes – face masks were required and attendance was limited – Kristensen was happy to have the Loper family together again to recognize the students’ achievements.

“It’s a wonderful day,” Kristensen said. “You all deserve it.”

“I’ve worked so hard over the past four years to get to this point and it’s something to celebrate with family,” she said. “It’s the biggest moment I can imagine.”

Clausen will pursue a master’s degree in speech-language pathology at UNK this fall. Her twin brother TeJai, an elementary education major, also attends UNK. He’ll student teach next semester before graduating in December.

Their parents Penny and Mark, who never earned college degrees, always encouraged their children to pursue higher education. Of course, they were on hand Friday to witness the next step in that process.

“It’s really great they were able to have a ceremony for the kids,” Penny said. “I just feel blessed that we were able to here and enjoy the day.”

Mark called UNK “a great fit” for Madison and TeJai.

“We’re proud of both of them. The education they received out here was awesome,” he said.

The Clausens want their children to find both success and enjoyment in their professional careers, something a college degree can help them accomplish.

Hill, who is enrolled in an applied health and sport sciences graduate program at Northwest Missouri State University, has an additional goal. He wants to be a role model for future generations.

“I’ve set a standard for sure,” Hill said of his degree. “I just need to make sure my kids and their kids keep it going.”