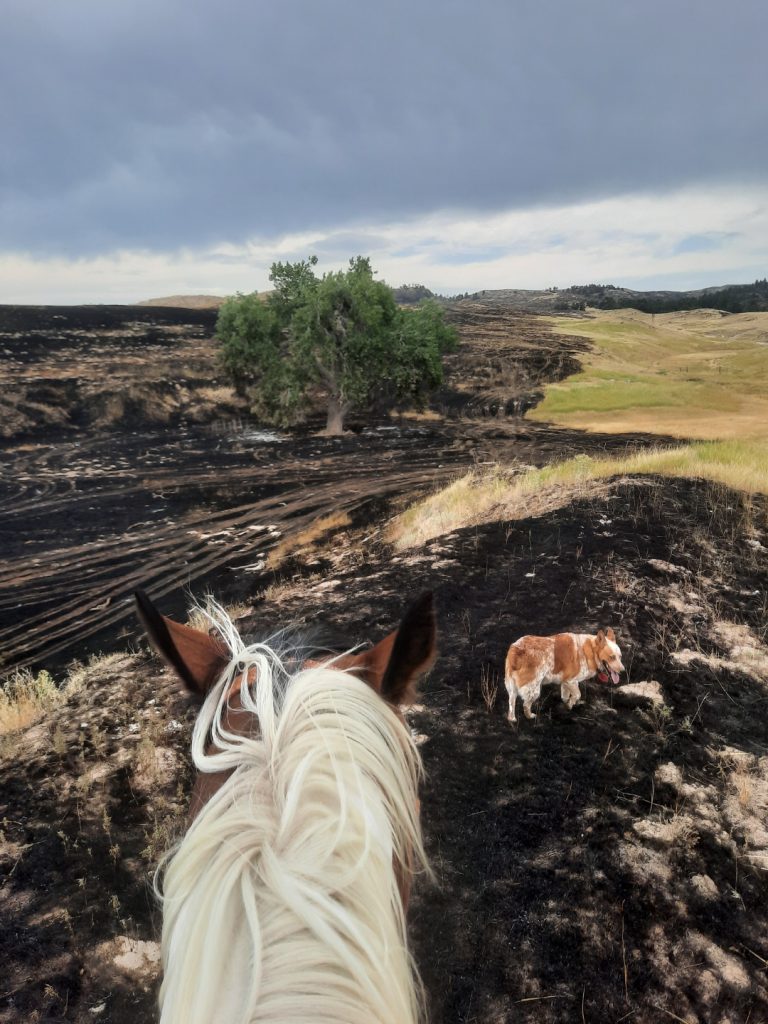 Old cottonwood on Terry Brown Ranch, made it as Paula Brown surveys damage from Wildfire. Photo by Paula Brown

Wildfires hit the Terry Brown Ranch south of McGrew in Banner County twice in four days, the first on Aug. 27 and then again when the winds flared the fire back to life on Aug. 30.

Paula Brown, daughter of Terry Brown, said the wildfires were in pretty rugged terrain. Her brother-in-law Floyd Hein Jr. alerted her to the fire, and on the way to the fire, she called 9-1-1 to which fire departments McGrew and Banner County responded.

In the hilly, rugged terrain, there are not many roads. So, Brown showed the firefighters and volunteers how to get to the fire in their vehicles.

“My dad (Terry) was helping the crew and checking on livestock along with my brother-in-law and moving cattle,” Brown said. “Once I was done showing the fire rigs where to go, Dad and I moved our two sets of cows away from the flames with (the help of) a dear friend.”

With combined efforts of fire departments from around the Panhandle, the fire was put out late Thursday after burning around 3,000 acres.

On Sunday, windy conditions caused some hotspots to flare up and find new fuel in the dry pasture grasses.

Brown was with her brother-in-law Hein, helping him fix a fence that had been cut to corral yearling cattle, and they didn’t see the smoke, but neighbors did and called them.

Once again, the Banner and McGrew fire departments were back on the scene in minutes.

“Bless their heart, it got away from them with those strong winds,” Brown said. “That’s when I went into panic mode. When I knew it was coming towards the house, I moved my animals. And yes, I did have one horse that got singed a little bit and hurt, but he’s eating his grain and being a pig right now, so he’s going to make it.”

Firefighters battled the flames and put the fire out, but the ranch lost about another 1,000 acres.

Along with the pastures, the ranch lost about 11 miles of fence.

“Those posts alone are over a hundred years old, as my grandfather and his brothers put them in,” she said.

The fire devoured most the ranches spring and summer pastures, but Brown said much of the winter pasture is still good.

A lot of the fence to be repaired is in rugged terrain, where the Browns won’t be able to get post hole diggers or skid loaders.

“We are rugged terrain, just to give you an idea before Dad had to go off to Vietnam and college, he fenced this area, and he was in the best shape,” she said.

Brown added they are so thankful to everyone who has helped and stopped by to see if they need help.

To help with the fencing, a Terry Brown Ranch Fire Fencing Supply Fund has been set up at ZM Lumber, and ZM will match up to $500.