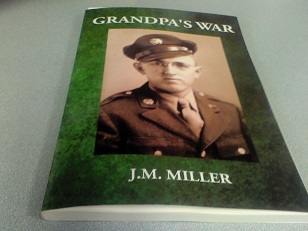 A book called “Grandpa’s War,” based on the Korean War involvement of the family of Justin Miller of Bancroft will be released soon. Miller, who is the Author, says the book features his Great Uncle Harlan.

Miller says Harlan was a Road Grader Operator with the 8th Combat Engineers, and died by hitting a land mine with his road grader.

Miller says the book features war stories about Harlan and his brothers.

Miller says this being the 70th year anniversary of the War is one of the reasons why he wrote the book.

He adds the book will be released in about a month or two or so.

Miller served in the Army for 8 years and farms with his dad and brother and also works at Norfolk Iron & Metal.