The Lower Elkhorn Natural Resources District (LENRD) staff and board members are inviting the public to an Open House Public Hearing this week to learn about and discuss proposed changes to its groundwater management area in portions of Cuming, Colfax, and Dodge Counties.

The event will take place on Thursday, March 25, at the Nielsen Center at 200 Anna Stalp Avenue in West Point from 5-7 p.m. 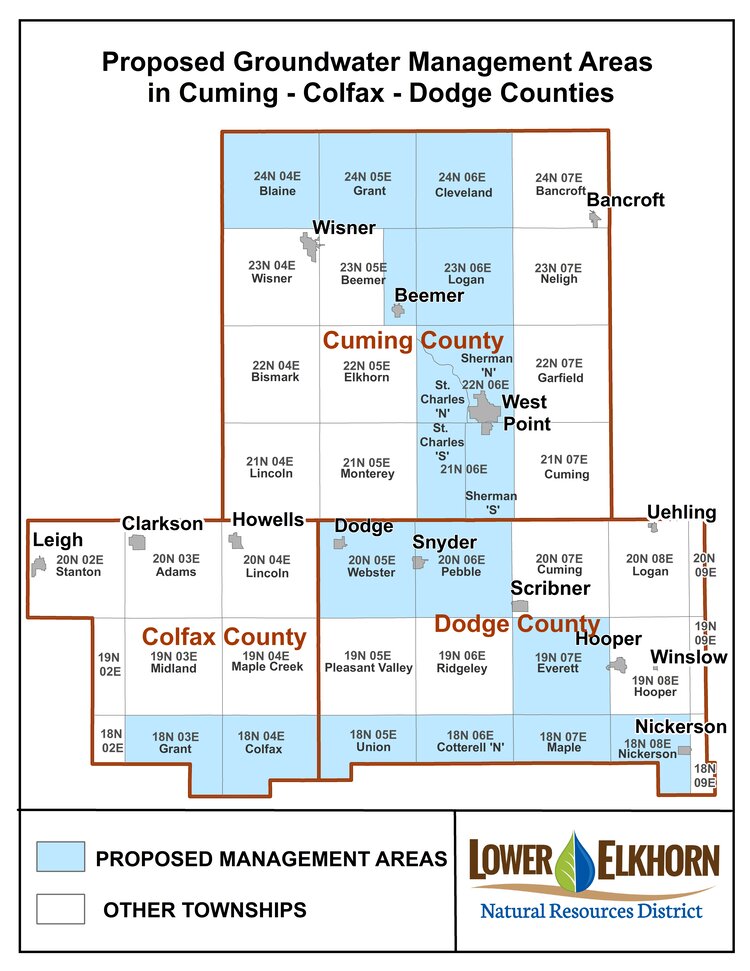 Members of the public will be given the opportunity to provide written or oral feedback to the district, and both forms of testimony carry equal weight at the hearing.

Bruckner explains how things will work that evening.

Bruckner said the open house format provides the opportunity for a constructive dialogue between interested parties or stakeholders and staff and board members which isn’t offered at a traditional public hearing.

“At a traditional public hearing, the elected body is typically seated at the front of the room, and those who want to provide verbal feedback are provided the opportunity to address them. That opportunity will also exist at this event, but stakeholders can also engage in separate conversations with elected officials and staff members to relay their point of view, and if necessary, receive an answer to a specific question or concern,” Bruckner said.

“The open house format helps to ease the tension by providing a setting that encourages participation and allows for a meaningful exchange of information that is relevant to an issue. We can diffuse some of that tension by addressing that concern with more information or providing data to help them understand the issue a little better,” Bruckner added.

Members of the public will be given the opportunity to provide written or oral feedback to the district, and both forms of testimony carry equal weight at the hearing. A court reporter will be present and will be creating an official record of the oral comments that are received. Those comments will be transcribed and provided in written form to the district.

Bruckner says they want to hear from people from the town of Dodge in particular.

Bruckner says writing materials will be provided to allow stakeholders who wish to provide feedback on the proposed changes in written form. The written testimony and the transcription of the oral comments will be provided to the Board of Directors, at a later date, and they will review the testimony prior to taking any additional action.

“We fully recognize that these proposed changes would require some adaptation from farm operations to comply with the Phase 2 area requirements, and this hearing will provide growers with the opportunity to inform the LENRD on that process. In addition, the community of Dodge is dealing with water quality issues for groundwater nitrate. We’re hopeful that we get some response from those residents as well,” Bruckner said.

“This open house public hearing is part of the formal process of delineation of a management area and we’re hoping that we get good attendance and engagement from the public. For anyone who is concerned about attending this event due to COVID-19 concerns, we have selected the Nielsen Community Center due to our ability to host a public event in a large venue that should allow for sufficient social distancing and health protection measures,” he said.

For anyone who is unable to attend, please remember that you can provide written testimony to the LENRD in advance of this event, and written testimony will be received up to the scheduled 7 p.m. completion. Those comments could be emailed to the district by sending them to lenrd@lenrd.org, or by U.S. Mail by mailing them to: Lower Elkhorn NRD, 1508 Square Turn Boulevard, Norfolk, NE 68701.