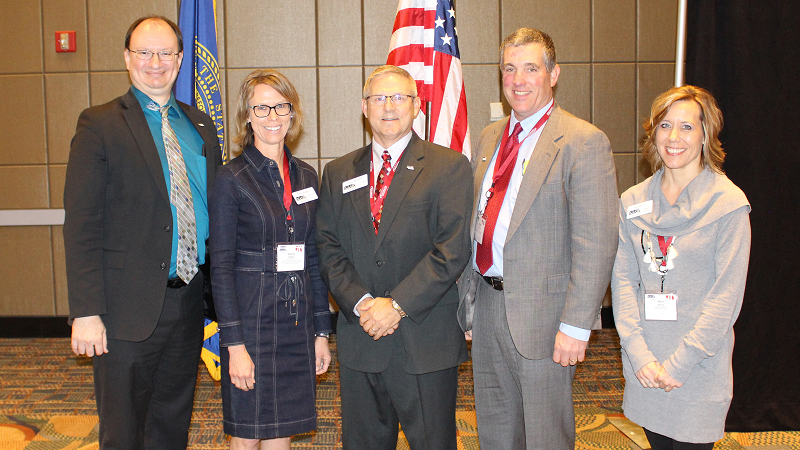 A new year brings in a new Officer for the Nebraska Association of School Board (NASB). At the annual State Education Conference held each November in Omaha, outgoing Past President, Lanny Boswell of Lincoln, announced that Kim Burry of the Bayard Public Schools Board of Education would be starting her four-year run as an NASB Officer, serving as the Associations President in 2022.

Burry has served on her local school board in Bayard since 2013 and been on the NASB Board of Directors since 2016. Burry was unanimously elected to serve as Vice President of NASB at the annual Delegate Assembly, in front of peer districts from across Nebraska. This will begin a four-year run as an Officer, moving from Vice President in 2020 to President-Elect in 2021, President in 2022, and Past President in 2023.

“I am honored to represent the state as the Vice President, and eventual President of NASB,” says Burry. “The relationships I have made with peers across this state being a part of the NASB Board of Directors has shaped not only who I am as a school board member in Bayard, but as an advocate across Nebraska.”

“I am often asked why I serve,” Burry continued. “That’s not always an easy, black and white answer. I serve for my family. My husband Brent, and our 3 kids. I serve for my community; for my school; for Bayard. I serve for the entire state. While I am a proud graduate from Bayard Public Schools, I spent my elementary and middle school years in Lincoln, which has allowed me to experience and understand the complicated issues we face across our state. I serve for my peers. The 1,700 locally elected school board members serving their students and communities. Our ability to network, share, learn and grow from one another is severely under rated. When we move public education forward, we move the local economy forward.”

“We are thrilled to have the leadership, passion and perspective that Kim brings to our organization,” said NASB Executive Director John Spatz. “I’m excited see her expand on the footprint NASB has across the state, and bring her energy and drive not only to our board, but every district across Nebraska over these next four years.”

NASB is a private, nonprofit organization that serves the needs of Nebraska’s public schools, to strengthen public education for all Nebraskans. Since 1918, NASB has been committed to serving school boards across the state by providing advocacy, consultation, board development, and training, as well as, district support-service programs for their 260 member school districts and educational service units across the state. The programs are managed by a professional staff, and governance oversight is carried out by a statewide Board of Directors consisting of 23 school board members elected by their peers.