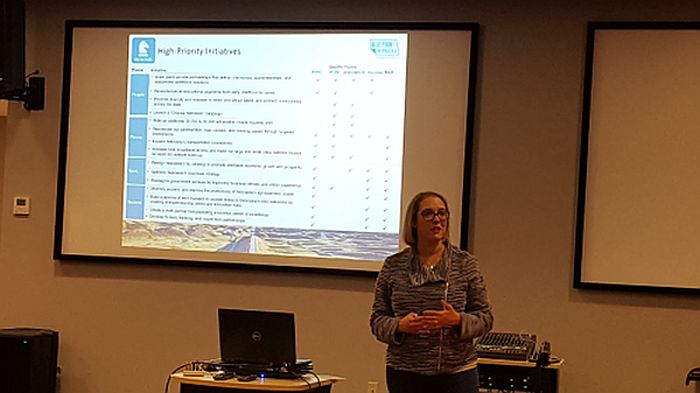 Cozad, Neb. — The Nebraska State Chamber of Commerce and Industry hosted a legislative forum on Friday, October 4, at the Paulsen Education Center in Cozad.  Some of the emphasis was on Blueprint Nebraska,  a long-term strategic economic development plan that calls for boosting the prosperity of all the state’s residents.

Holley Salmi, Vice President of Communications & Policy for the Nebraska Chamber says Blueprint Nebraska gathered feedback from across the state and it was learned from the feedback the state should play to its strengths…

“Our strengths really do fall under three categories…people, land and location. And when you think about what Blueprint Nebraska is bringing to the table…they’re suggesting that we optimize these resources…our people, obviously our work ethic, our values — we have a very strong educational system.”

“And the top three categories are manufacturing, transportation and warehousing and agriculture.”  Salmi says, “so if you really think about it,  Nebraska, has probably the largest opportunity to gain,  from those three sectors, that are in the process of innovating and moving forward in advanced technologies.”

The report says the state needs to build on its strengths through research and development and building productivity and innovation.

By 2030, Blueprint Nebraska has five goals that need to be met to realize the vision of its initiatives: Make Nebraska a top-three state to live in according to various national rankings; create 25,000 jobs; grow annual income of Nebraskans by $15,000; add 43,000 18-to-34-year-old residents in Nebraska by 2030 and boost research and development investment by $200 million annually.

Blueprint Nebraska gathered feedback from 2,000 residents and leaders at more than 60 events across 30 regions of the state and from 5,000 more through a survey. It also benefited from the insights of more than 320 advisers representing diverse regions and industry sectors.

The result is the Blueprint Nebraska report, the state’s first long-term, strategic plan with measurable economic objectives and specific recommendations aimed at boosting prosperity for all. More information is available at  Blueprint-Nebraska.org.

Legislative insight was provided by Kristen Hassebrook, Executive Vice President – Legislation and Policy for the Nebraska Chamber.  Hassebrook  talked about what the Legislature got done in the 2019 session that impacts business…

Hassebrook says a medical marijuana bill was introduced, but it didn’t pass.

Hassebrook says for the 2020 legislative session, business incentives are at the top of the priority list for the State Chamber, as the state’s current program expires at the end of that year. Hassebrook says a few other measures involving the Blueprint Nebraska initiative, bills centered on workforce and broadband issues, could also enter the picture.

36th District State Sen. Matt Williams of Gothenburg was among those in attendance at the State Chamber Legislative Forum.  Sen. Williams tells the Rural Radio Network (RRN) what issues could rise to the top in the 2020 legislative session…

“Replacement of Nebraska Advantage, that we have the tools in the tool kit necessary to recruit and expand our industrial base in our state…so I think it’s important that we have that opportunity…and then beyond that I think we have to continue working on the property tax issue that we have here…we have an imbalance right now that our property taxpayers are paying a substantial part of the load, for not just schools but everything else. I think those are issues that I will be working on and committed to finding solutions (for).”

Sen. Williams also tells the RRN about his priorities… .

The Nebraska State Chamber of Commerce & Industry’s 30-community tour of the state began Aug. 12 and lasts through late October and is being held in coordination with local chambers of commerce and community organizations across the state.  The upcoming Legislative Session begins Wednesday, Jan. 8, 2020.