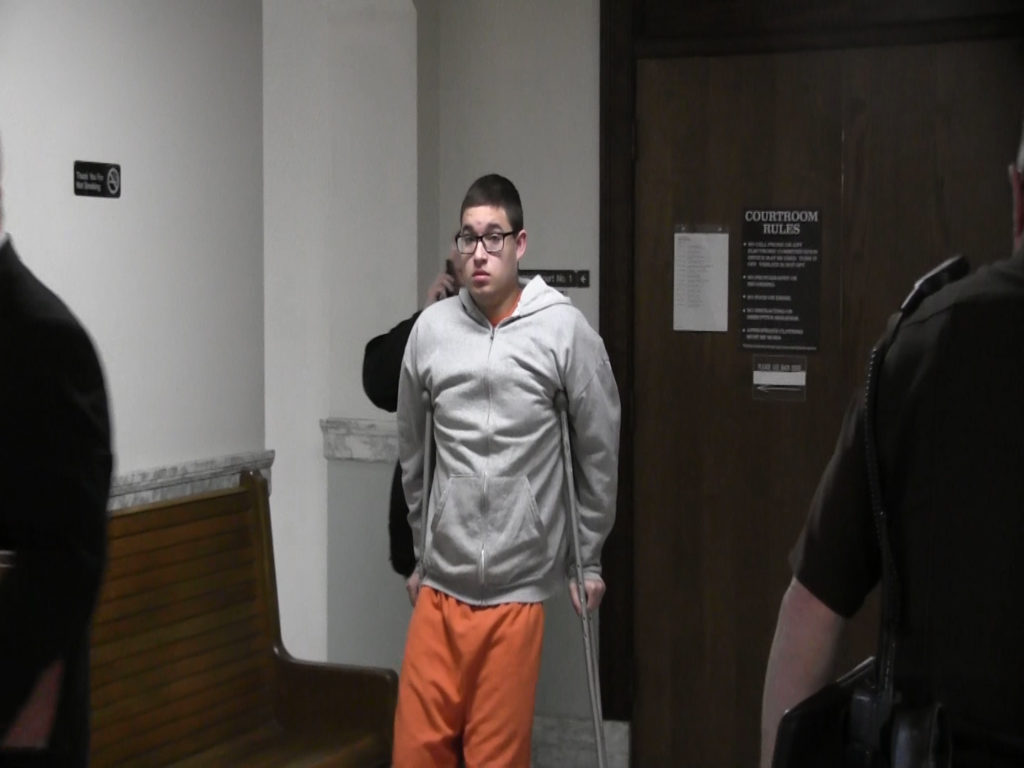 A 20-year-old Scottsbluff man convicted of having sex with a 12 year old girl and having multiple files of child pornography on his phone was sentenced to prison this morning.

Ashanti Kelley was sentenced to 5 to 8 years on convictions of 1st Degree Sexual Assault on an Incompetent Person, Attempted Child Enticement via an Electronic Communication Device, and 1 to 2 years in prison on each of his four counts of Possession of Child Pornography.

District Judge Andrea Miller ruled that all six counts will run concurrently, and he was given credit for 246 days already served.

Court documents say following a forensic interview with the victim, investigators learned that Kelley reportedly had sex with the girl on several occasions in the summer of 2017, had filmed the girl and saved multiple photos and videos sent through social media.

Kelley also threatened to publicly distribute images of the girl if she didn’t perform a sex act on him.

He was initially charged with 15 felony charges stemming from his spring arrest, but pleaded guilty to the 6 amended charges in October.

During Thursday’s sentencing, County Attorney Dave Eubanks maintained that Kelley manipulated this child. Eubanks reiterated that not only did Kelley have sex with a 12-year-old girl, but reached out to her and encouraged her-and possibly others- to send sexually explicit photos. Additionally, Kelley then blackmailed her with the photos he had obtained, and forced her to perform additional sex acts on him.

He adds that Kelley’s statement in the pre-sentencing report shows he has taken no responsibility for his actions, and claimed that the girl manipulated him.

“He says a 12-year-old girl manipulated him? He threatened to release these photos. He’s young. He has a prior record. He fits the profile of a sexual predator,” remarked Eubanks. “I don’t think the 12-year-old manipulated him. He manipulated her, and needs to pay the price for it.”

Defense Attorney Paul Payne noted in his closing arguments that Ashanti isn’t a perfect person, and agreed that he exercised poor judgement and made horrid decisions.

However when looking at the PSI, Kelley scored low risk in a lot of areas and may not be likely to re-offend.

Payne also noted that after Kelley moved to Rapid City, he was a productive citizen, got married, and maintained two jobs. He also stated that once this ordeal is behind him, Kelley plans to go to aviation mechanic school and be a contributing member of society.

“I take full responsibility for my actions in this case. I was young. I made mistakes. I made a lot of mistakes in my life,” said Kelley. “I want to apologize to my victim and her family, and to my family. ”

Judge Andrea Miller said that at times, Kelley seems to take ownership for actions, but at other times has made highly concerning statements. She cited a remark where Kelley defended his actions because they were both under 18, it didn’t matter. Judge Miller said comments like that to minimize the actions and repercussions are ‘definitely not okay.’

She concluded that while he was a young man at the time of the offense, it does not excuse or justify his actions. Judge Miller said the level of manipulation used to obtain the photos, videos, and sexual acts is most concerning.

Following her statements, she handed out the 5 to 8 year  prison sentence, as well requiring Kelley to register as a sex offender.  If Kelley doesn’t lose any good time while in custody of the Nebraska Department of Corrections, he could be released in approximately 22 months.