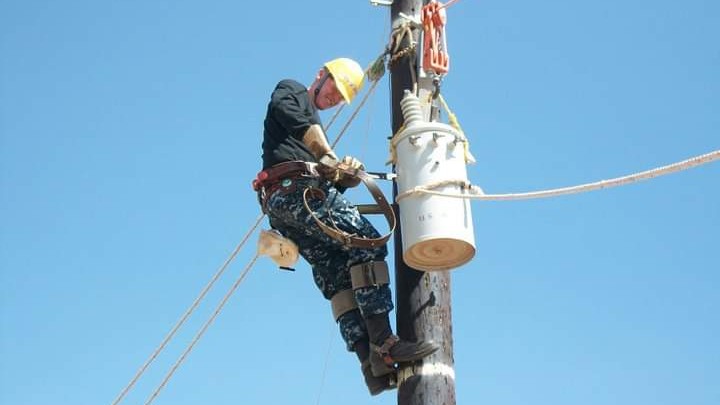 Bridgeport native Mike Beyer is someone who makes his community and country proud.

From 2010 to 2018, he served as a Construction Electrician in the Navy, including assignments at Camp David and U.S. Naval Special Warfare Command. On his deployments to Iraq, Petty Officer Second Class Beyer supported SEAL Teams 3 and 7 as a lead electrician during their mission to defeat ISIS.

Mike is one of many Nebraska veterans who learned his trade in the service, completing an 8,000-hour military apprenticeship endorsed by the U.S. Department of Labor.

After his service, he went back home to Bridgeport to get married and start a family.

“My wife grew up in Bridgeport like me, and we think there’s no better place to raise your kids,” Mike said.

But after returning to the Panhandle to start a civilian electrician career, he learned Nebraska’s job licensing gave no hero’s welcome.

State law says Mike’s training and eight years of military service would only count as one year toward receiving a journeyman’s license.

Journeymen can perform their own wiring and supervise apprentices, but the state licensing application says journeymen must have “4 years verifiable experience acceptable” to the state electrical board, requiring Mike to work yet another three years to become licensed.

Currently, Mike works as an electrical lineman for the city of Bridgeport, but without a license, he’s limited in the work he can perform.

“Getting my license would mean being able to get a raise for the work I’m doing, and be able to use more of the electrical skills I learned in the Navy,” Mike said.

In Lincoln, elected officials in both parties speak frequently about making Nebraska the best state for veterans and military families, but Mike says they’re not making good on their promises.

One day while driving, he heard Gov. Pete Ricketts on the radio talking about occupational licensing for veterans.

“What I was hearing from the governor about how Nebraska made it easier for veterans to become licensed didn’t seem to be true in my case,” Mike said.

That’s when Mike decided to get involved in changing the law. Nebraska state Sen. Tom Briese has introduced a bill that would finally grant Mike his well-deserved promotion. Legislative Bill 263 would provide universal recognition of occupational licensing and career experience in a wide range of professions in military and civilian life.

As Mike learned, the initial rules for joining a profession can vary dramatically across jurisdictions, even when the actual work performed may be identical.

The universal recognition proposal would require for military-certified applicants, or those who have worked in a field for more than three years, to be automatically eligible for Nebraska licensing, as long as they were applying for a license with the same functions as their past work.

Universal recognition applicants could still be required to pay fees or take an exam like anyone else, and licensing boards can deny applicants who have disqualifying issues on their records.

But under LB263, Mike could qualify either through either his military certification or his length of work experience.

Still, the Nebraska State Electrical Division and the International Brotherhood of Electrical Workers have opposed LB263 before the Legislature’s Government, Military and Veterans Affairs Committee.

Senators are more much likely to hear from these groups than people like Mike. So far, that’s left LB263 stuck in committee, as a similar proposal was last year.

Mike believes universal recognition should not have to wait another session in the Unicameral, for his sake, and for his fellow veterans.

“Veterans should be able to bring their skills to our state. A veteran with eight years of experience and a completed apprenticeship should not be set at the same starting point as someone with one or two years of experience,” Mike said.

“I’m confident I would pass the journeyman exam and perform work to the standards the state electrical board expects,” Mike said.

In theaters of war throughout our history, the U.S. military has made a vow to leave no man behind. For Mike Beyer, there could be no better squadron to fulfill that mission than Col. Tom Brewer’s Government, Military and Veterans Affairs Committee. And there should be no excuse for failure.