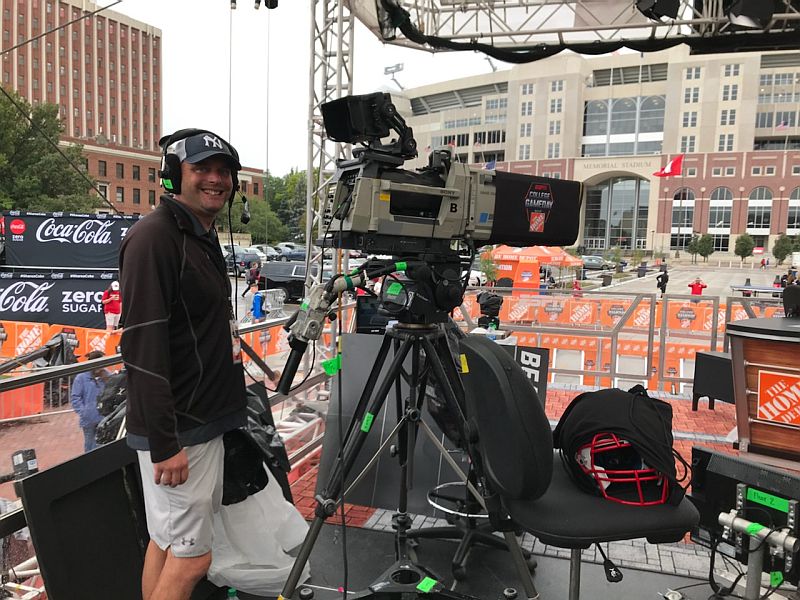 LINCOLN–An ESPN camera operator helped produce more than 250 Football College GameDay shows, and this weekend he is back at the University of Nebraska-Lincoln where it all began.

When Joe Andreasen was a senior at UNL, a friend called him asking if he could help host College GameDay. He jumped on the opportunity and has been a part of the team since.

“This is where it started, 20 years ago. Time flies. It doesn’t feel like 20 years at all,” Andreasen said.

Andreasen travels with ESPN and hasn’t been back to his Alma Mater since UNL’s last College GameDay appearance in 2007.

“I loved going to school here. Nebraska football was the No. 1 team in the nation back then,” Andreasen said.

It was his goal to work for ESPN, but he never thought it would actually happen. When he started, he was the lowest on the totem pole, but he didn’t care. He said he was thankful for his chance to work for ESPN.

“Just to even be the lowest, I was the happiest person ever,” Andreasen said.

He was the first of three UNL alumni to land a spot working for ESPN. He helped former classmates Michael Ruhlman and Chris Swihart each get a foot in the door.

Ruhlman graduated from UNL in 2001, followed by Swihart in 2002. Ruhlman spent three years rising through the ranks before earning a job as a stage manager. He attributes his success to taking initiative and maintaining connections.

“The more you know, the better you are no matter where you end up,” Ruhlman said.

Swihart started off working below even grunt work. He would take out the trash, transport talent, grab coffee, etc. He was doing anything and everything to appease his supervisors, and was just happy to be a part of major events.

Swihart moved up when supervisors noticed his background with technology.

“Anyone can get coffee, but not everyone can make the pictures appear on the proper screens,” Swihart said.

He works as a program operator for ESPN and helps showcase the Saturday night game broadcasts.

Without Andreasen, Ruhlman, Swihart and many other people working for ESPN, fans could not see the action they love unfold across the country.

“On just this show, we have over 90 people that travel each week to help set everything up and make everything run smoothly,” Ruhlman said.

However, the travel takes a toll.

Many of these behind the scenes employees fly out on a Wednesday night or Thursday morning to get to their destination. They then set to work to produce the show. Once they finish, they hopefully arrive home by Sunday morning.

This takes up at least 17 weeks of the year for College GameDay alone. Many of these employees, including Andreason, also travel for ESPN’s Basketball College GameDay, for the MLB All-Star games, for the College World Series and even for the NFL Draft.

Despite these long travel times, Andreasen and Swihart find a way to make it work.

It would be too much for him to go straight from site to site like some employees have to do.

“For me, I have an easier time than others. My wife and I didn’t meet until I was already in the business,” Swihart said.

He sometimes still has tough times and calls his wife as much as he can.

Andreasen, a father of four, still makes the most with his family while he travels. His wife, Monica, and their four children were able to make the trip from their home in Parker, Colorado, to Lincoln for College GameDay.

“Now that the boys are getting older, we are hoping to come to at least a few games a season,” Monica Andreasen said.

The couple’s daughters are in school, but their twin boys are just 7 months old and changing every day.

“When we are gone on Thursdays and Fridays, the girls are in school, so I don’t think I miss too much with them,” Joe Andreasen said.

Monica Andreasen joked she wouldn’t know how they would fill their time if Andreasen did not travel, but admits it wasn’t all smiles in the beginning.

“It was difficult at first, but then once we get into a rhythm it worked itself out,” she said.

For now, they are making do. Joe Andreasen said he wouldn’t change his job for anything.

“This is like hitting the lottery, everyone wants to be on this show,” he said.

The time in Lincoln reminds him why he loves his job.

“Even right before the show comes on, when we do our open scene set, the music starts playing, the crowd starts cheering, that I mean that’s an adrenaline rush every, every Saturday morning, and that’s never changed,” he said.