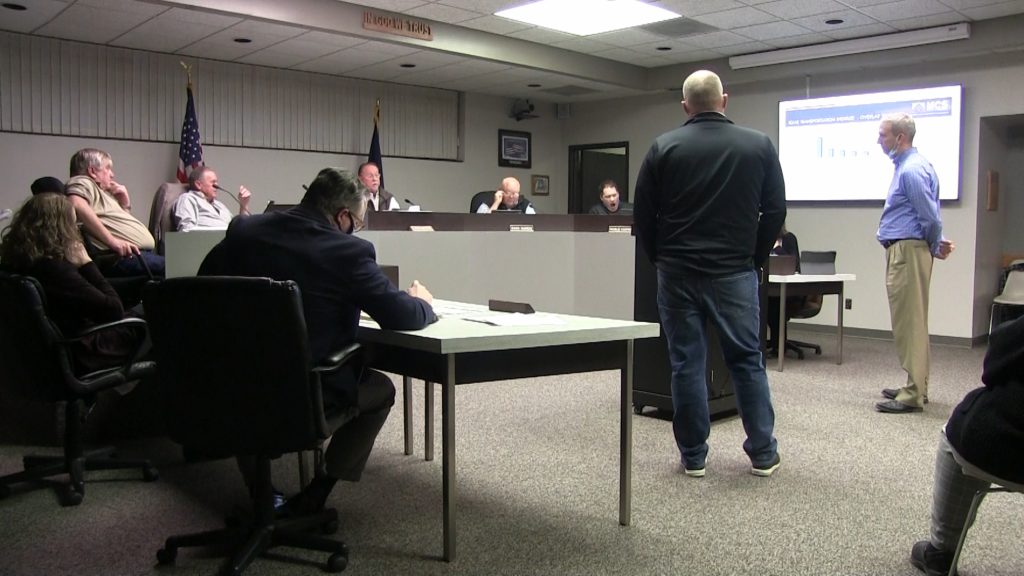 Weeks after giving an enthusiastic thumbs up to the Stegall Road repaving project, Scotts Bluff County Commissioners held a lengthy discussion this week on whether there were any options to further reduce the cost of the $1.67 million plan, and whether such modifications could be done through a change-order or would force a re-bid of the entire project.

At issue were the design specifications as previously approved by the board, specifically the type of interlayer that would be used to provide additional strength and durability to the roadway surface and help push out major maintenance to 15 years or more.

Weeks after project approval, the Board Monday received a presentation on an interlayer alternative of Stress Absorbing Fiberglass Layer with Emulsified Asphalt, also called Fibermat, available through successful bidder Simon Contractors. Consisting of shredded fiberglass strands sandwiched between two layers of asphalt emulsion sprayed directly to the roadway surface according to Steve Peck with Simon.

Peck noted the process has been used by the Nebraska Department of Transportation, including one local project. “This was the product used on Highway 26 just outside of town, with a thin-lift overlay on top of it, which is an SLX layer that you’re putting on the bottom (of Stegall),” said Peck. “It was overlayed over the top of that surface.” He told commissioners of a number of similar NDOT projects where Simon has used the process, saying district engineers said it has held up to visual inspections, including one from 2009.

Commissioner Russ Reisig noted the difference in price between the Fibermat and the interlayer approved for the project was about 50%, which would be a savings of about $125,000. On Jan. 19, Commissioners approved Simon’s bid that had two options, one for just over $1 million for three miles, with the ability to pay an addition of about $670,000 for two more miles. Before approval, Roads Department Director Linda Grummert told the board approving the two additional miles would leave the department fund short of their usual cash level by about $136,000 for the start of the next fiscal year, and at that time board members were unanimous supporting the project as designed, saying they would find the money for the Roads fund going forward.

Engineering firm M.C Schaff then presented an overview of the project as developed, bid and awarded, saying the specifications in the job were intended to reduce the need for more frequent maintenance, at the County’s request. Commissioners were told the interlayer in the original design was equivalent to three inches of asphalt, and Dave Schaff said it would provide much more structural stability than the Fibermat. “We can either look at a 15-year life serviceability design for this project, or we can look at a 7.5 to 10-year life serviceability design. It’s up to you guys, that’s what we’re looking at,” said Schaff. “We can go for a lower-grade product, they’re not apples to apples. We can go for a lower grade product, and plan on maintaining it (Stegall Road) more.”

Schaff provided information from the Texas Transportation Institute on testing of various interlayer products, including both the Fibermat, a non-woven paving fabric and the MPG-G4 product originally proposed for the project. In the chart graphic, TTI said the Fibermat had a performance factor of 1.3, meaning it would give 30 percent more durability before the cracking typical of a non-reinforced control sample with a factor of 1.0. The non-woven paving fabric, which Schaff said his company was familiar with and had been used on several projects, had a factor of 1.5, while the MPG-G4 product had a factor of 5.0.

Board Chair Ken Meyer told Schaff the commissioners didn’t have the less-expensive options available to them when bidding the project, and now the panel was looking at what could be done to save money. “I don’t think anybody’s looking to cut corners. You don’t wont it, I don’t think Simons want to do that, this board certainly doesn’t want to do that. When we’re finished, we want a good road,” said Meyer. “Now, do we use a more expensive product to achieve that, or do we use something not quite as expensive and still have a good road when we’re finished. We don’t have a diamond mine somewhere we can tap into to continue doing all this stuff.”  Schaff countered, “But I think it comes down to whether you want a good road in seven years, or you want to have a good road in 15 years, and how much money are you going to spend long-term.”

Schaff also noted that the Fibermat product, while used by the State on several roadways, is still a joint research and development project involving several entities, including NDOT and Simon Contractors. He said requests to the State for design characteristic specifications have gone unanswered, and his company has not been able to find that information anywhere. “What we are held accountable for, through our professional liability insurance, is against negligence. And, I gotta be honest, if you ask us to specify a product that doesn’t have any design backing to it, then we’re being negligent.”

Commissioner Reisig asked what if the county signs a waiver saying the engineering firm wouldn’t be responsible, to which Schaff said the company would work with the county. When asked, Peck said he could not supply the requested specifications on the Fibermat process, and Reisig said he would work to obtain the information needed for the product to be considered.

The Commissioners are also considering using County Roads crews to perform the chip-sealing that would be the final top surface of the roadway, which would save the county an additional estimated $125,000, bringing estimated savings using the Fibermat to more than $250,000. Use of the non-woven paving fabric would increase that figure, as it is even less expensive than the fiberglass and emulsified asphalt product.

At the end of a discussion that neared two hours, Commissioners decided to table making any changes to the project or contract until more information became available ahead of their next meeting.