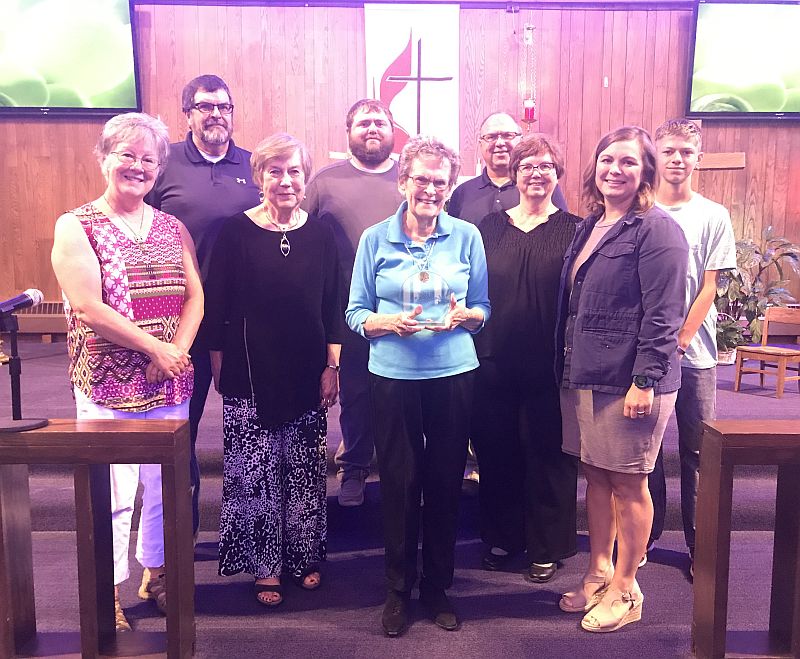 On Sunday, September 15, Carolyn Worthman was named recipient of the seventh annual Make Your Mark on Cozad Award and presented a plaque by Cozad Library Foundation President Claire Bazata at the United Methodist Church in Cozad.

The Make Your Mark on Cozad Award is presented in conjunction with the Wilson Public Library’s celebration of International Dot Day. Themes of Peter H. Reynolds’ book The Dot:  creativity, courage, and collaboration, inspired the observance of September 15th by teachers, libraries, and artists around the world. Given as a way to spotlight community members who are enthusiastic supporters of the library, Cozad as a whole, and the arts specifically, the inaugural award was bestowed upon Mrs. Katherine Wilson in September 2013.

Members of the Cozad Library Foundation were quick to select Worthman for the prestigious award at their last regular meeting in early April. Carolyn was a long-term promoter of the library by serving on the Library Board and Library Foundation for many years. In this position, there was always a push from Carolyn to be sure artwork, specifically art by native Cozadians, was included and promoted in the library. An avid reader, Mrs. Worthman is also founding member of the longest running book club in Cozad.  Carolyn has served Cozad in many civic and philanthropic capacities as well as a being member of the First United Methodist Church and uses her love of song to spread joy to those around her.