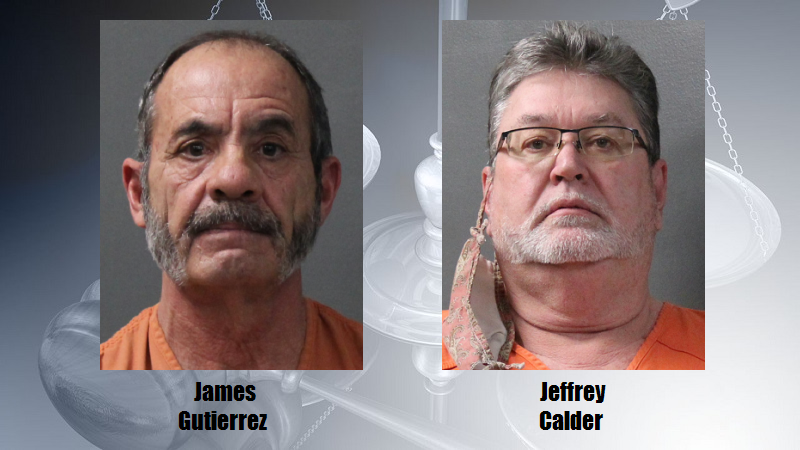 Three men arrested as part of an investigation into alleged sex trafficking made initial appearances in Scotts Bluff County Court Monday, with further proceedings for all three set for Feb. 22.

66-year-old James “Jimbo” Gutierrez of Gering was charged with two counts of sex trafficking and one count of 1st degree forcible sexual assault, and 60-year-old Jeffrey B. Calder of Scottsbluff was charged with one count each of sex trafficking and possession of a controlled substance, methamphetamine, and two counts of possession of a short shotgun following their arrest last Friday.

Arrest affidavits for both Gutierrez and Calder were sealed by Judge Randin Roland upon request of prosecutors, who said in their motion that “statements by victims and the defendant in this case indicate there are other victims”. Court records indicate one count of sex trafficking against both men stem from last December, with the sexual assault charge against Gutierrez during the same time frame. The additional crime leading to the second sex trafficking charge against Gutierrez is alleged to have taken place early last month.

According to his arrest affidavit, Kumm was at Calder’s Auto in Scottsbluff when officers arrived, and the search of the premises uncovered seven large knives, a sword, and at least 19 firearms, plus 3 grams of suspected methamphetamine, THC gummies, two bags of suspected THC and a digital scale.

Kumm is charged with 1st offense felon in possession of a firearm and possession of a controlled substance, methamphetamine. Bond in his case was set at $500,000 with a ten percent provision.

Preliminary hearings for Gutierrez and Kumm take place in three weeks, while Calder’s hearing the same day will center around his selection of defense counsel.