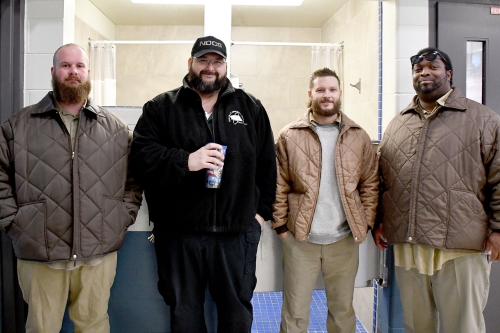 Omaha, Neb. — A much-needed improvement project is providing men at the Omaha Correctional Center (OCC) with valuable, high demand skills. For the last four-and-a-half months, a small crew has been demolishing and renovating all of the showers and bathrooms in the facility.

“This project in particular provides opportunities for the incarcerated population to take pride in the work they have done while improving the living environment for all,” said OCC Warden Rich Cruickshank. “Along with the unit manager, the men also have a hand in some of the design choices, color scheme and layout, of the showers. It gives them a real sense of purpose.”

The men chose accent tile that matched the colors in each living unit. The tile size and pattern varies from bathroom to bathroom, giving each one an individual appearance. The tiles are the same kind sold and used in residential bathrooms, which makes the spaces appear less institutional.

“Showers are a big deal,” said crew member Nathan Harvey. “The men in the unit really appreciate the work we are doing.”

When Christopher Svoboda heard about the project, he knew immediately he wanted to be part of the group. “It’s been extremely rewarding,” said Svoboda. “My days go by so much faster with something meaningful to do.”

Svoboda, who has previous experience as a tiler, is serving as a lead on the project. Other members of the crew have experience in other fields and are learning their skills from the ground up. In addition to tiling the bathrooms, work includes installing fixtures and electrical wiring.

Facility Maintenance Specialist Shawn Nelson supervises the group. He compares them to a commercial crew, with varying levels of experience and skill. “We essentially have a foreman, a journeyman and an apprentice.”

“Having the men do the renovations is a great way to provide them with marketable skills such as tiling, and the opportunity to transfer those skills to others on the crew,” added Cruickshank. “As a result, it makes them more employable upon release.”

Svoboda also appreciates the opportunity to provide training to others, in a unique environment. “It’s easier to be patient and let people make mistakes. On the outside, it’s expensive to risk your own money when mistakes are made and you are under tight deadlines.”

For Lucas Coppock, this project is an excellent opportunity to acquire a trade. “I learn better hands-on. There are certain things you don’t learn until you make mistakes.”

Even though some crew members are novices, the project is still expected to be completed faster than it would have been using a traditional contractor. “We can work on our schedule so it is less disruptive to facility operations,” explained Cruickshank.

So far, three bathrooms have been completed. It will take close to a year to renovate all of the bathrooms within the facility. In the spring, other projects including sidewalk repairs, a garden expansion, window frame and door repairs are scheduled, all utilizing facility crews.