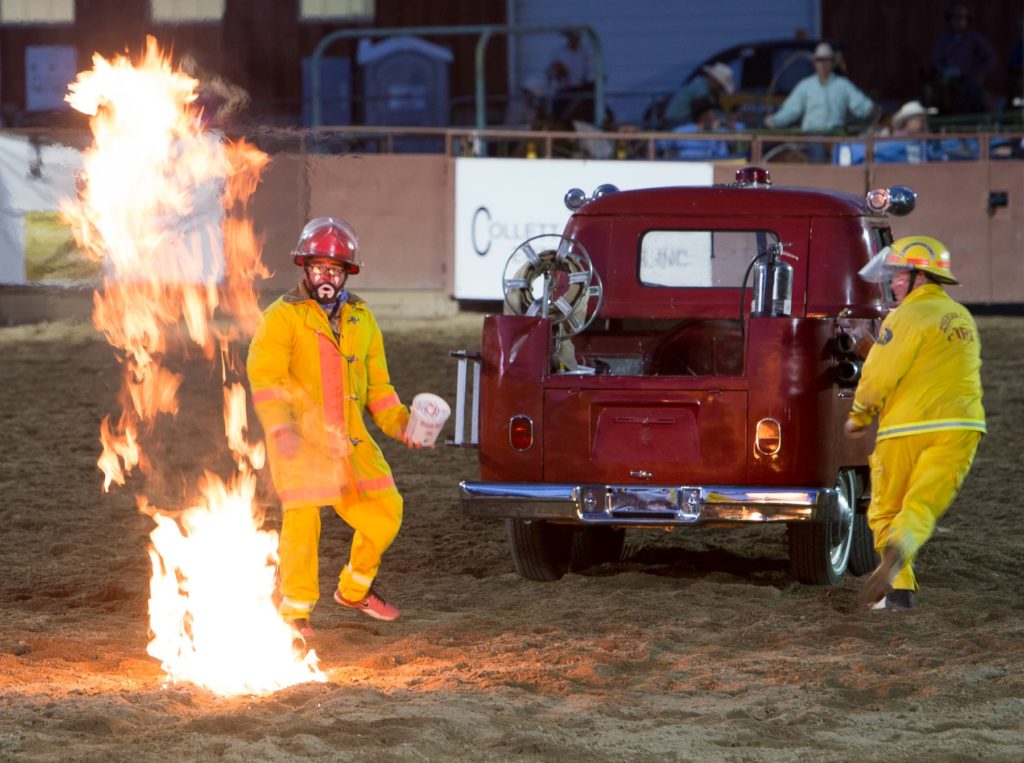 Rodeo clown Mark Swingler will “put out fires” during the Hastings rodeo August 23-25. The Texas man provides the comedy and laughs during each night of the rodeo.

Swingler, of Leander, Texas, is making his first appearance at the Oregon Trail Rodeo, and this year, he is in town to put out any fires that “might” happen in the rodeo arena!

The long-time clown’s act involves a refurbished 1964 Volkswagon bus that has been cut in half. Swingler, in firemen’s gear, answers a fire call in the arena, driving the truck in and putting it on its end when he hits the brakes. “I can get all four tires off the ground,” he laughs.

It’s an act that both kids and adults love. He patterned it after kids’ movies with clean jokes that only adults understand. “It’s kid-oriented, slapstick, goofy, funny stuff with lines in there that adults will catch,” he said. “Kids laugh at them but they don’t know what they’re laughing at. It’s a solid act.”

Swingler started in rodeo as a bull rider in the 1980s, competing in high school and then in college at Sam Houston State (Huntsville, Texas) and at Southwest Texas College at Uvalde. It was while in the practice pen that he began as a bullfighter. Cowboys would get together once a week, riding bulls, and they were usually short a bullfighter, so Swingler stepped in. “I’d ride bulls, then put on my tennis shoes (to fight bulls), then ride bulls,” he said. He never intended to be a bullfighter, but “it started being fun.” In those days, the bullfighter also worked as the clown, so Swingler stepped into that role as well.

He got his PRCA card in 1993, quit bullfighting, and began clowning.

Since then, he’s worked some of the biggest rodeos in the nation, from Houston to Montana, and from the east coast to Oregon. But the small towns have a special appeal to him. “I really enjoy the Hastings-type rodeos,’ he said, “the small towns that get big crowds. They roll out the red carpet for you. And the community involvement and the atmosphere is unbelievable. Everybody comes out to make this the best event in their town for the year. I really look forward to going.”

Swingler will work with announcer Travis Schauda, Broken, Bow, who will call the play-by-play action.

Swingler has been married to his wife Tami for 28 years; they have an adult daughter.

The rodeo is held at the Adams County Fairgrounds at 947 S. Baltimore, Hastings.

Tickets range in price from $10 to $20 for adults and from $5 to $20 for children. They can be purchased online at www.AdamsCountyFairgrounds.com, at the fairgrounds office, and at the gate.