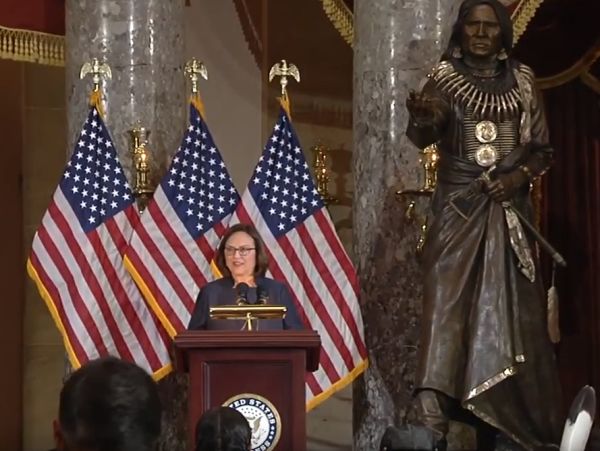 WASHINGTON, D.C. – On Wednesday, U.S. Senator Deb Fischer (R-Neb.) joined Nebraskans, members of the Ponca tribe, and House and Senate leadership at a dedication ceremony for Nebraska’s statue of Chief Standing Bear in the U.S. Capitol.

“Chief Standing Bear is a Nebraska treasure and an American hero. It was a privilege to join so many Nebraskans, Ponca tribe members, and colleagues today at his statue dedication ceremony. The statue will inspire the millions of people who visit National Statuary Hall at the U.S. Capitol every year to learn about his enduring commitment to equality and human freedom,” said Senator Fischer.

More information on the statue of Chief Standing Bear:

The Chief Standing Bear statue, which was sculpted by Ben Victor two years ago, is made of bronze and stands 11 feet tall from its base. It honors the former chief of the Ponca tribe, who was arrested while traveling back to Nebraska to bury his son. During the subsequent 1879 trial, Chief Standing Bear’s speech lead to the recognition of Native Americans as people under the law with full civil rights. The statue of William Jennings Bryan, which stood in the U.S. Capitol since 1937, now returns to Nebraska for display.