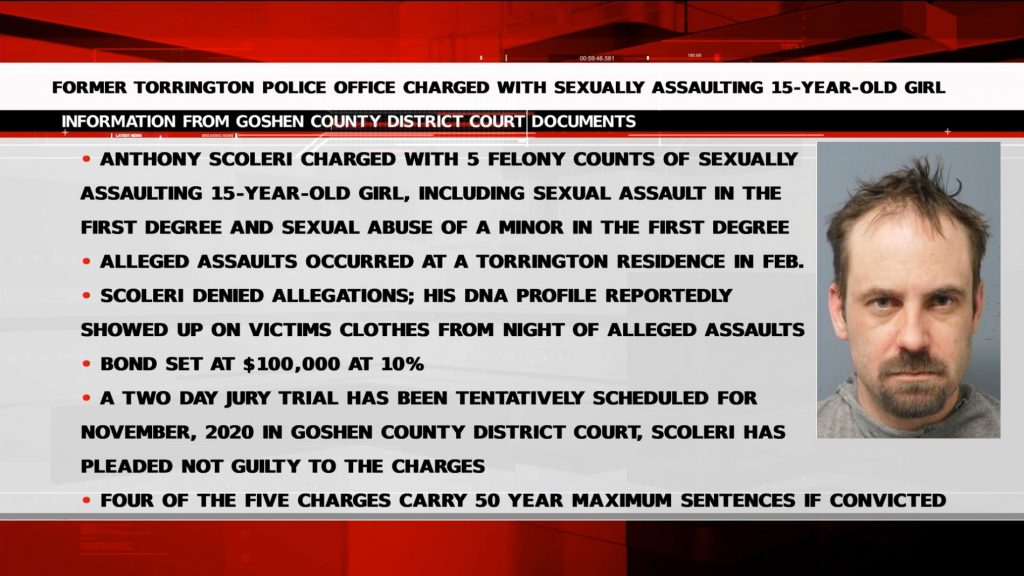 A former investigator for the Torrington Police Department is set to stand trial later this year after being accused of sexually assaulting a 15-year-old girl in February.

Newly unsealed Goshen County Court documents say that on February 22nd, the Torrington Police Department took a report from the victim staying that she was assaulted by Scoleri in a garage at a Torrington residence.

The affidavit states that Scoleri forced the victim to have sex with him as well as perform sex acts on each other.

An officer with the Wyoming Division of Criminal Investigation was assigned to the case and spoke to Scoleri about the allegations. Scoleri denied sexually assaulting the victim and told the officer he had no idea why she would be making these claims.

Circuit Court Judge Nathaniel Hibben signed a search warrant, and the girl’s clothing items were sent in for DNA testing. In April, the findings came back, and Scoleri’s DNA profile was located on the victim’s clothing.

A warrant for Scoleri’s arrest was then issued and served. He was booked into the Goshen County Detention Center on a $100,000 bond at 10% and he has since bonded out.

Scoleri was arraigned on the five felony charges on Tuesday in Goshen County District Court, and he pleaded not guilty to the crimes.

A two day jury trial is set to begin on November 16th in District Court. If convicted on the Sexual Assault in the First Degree charge, he could be facing a prison sentence ranging from 5 to 50 years