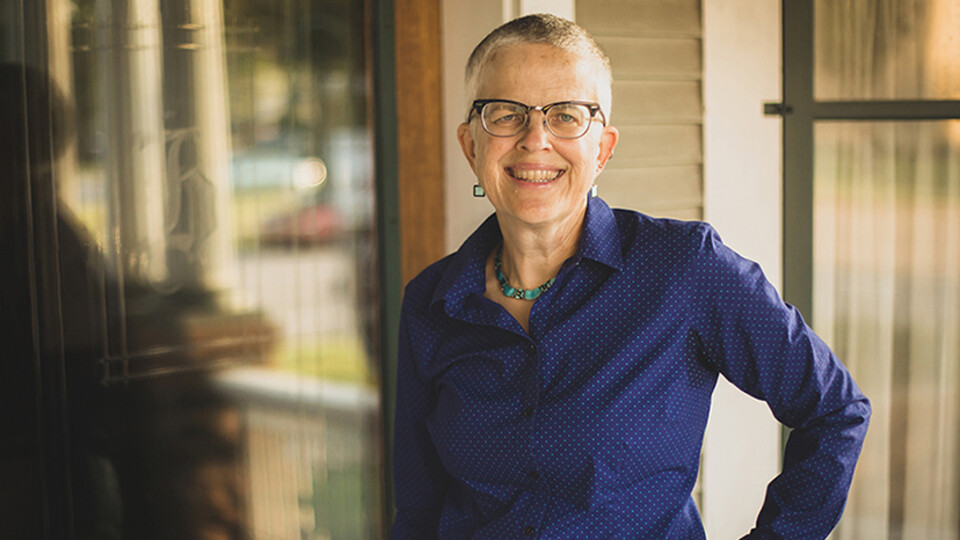 Melissa Homestead, author of "The Only Wonderful Things," is photographed in front of the Harris House in Lincoln, Nebraska, where Willa Cather and Edith Lewis met. (Courtesy photo/Alma Ceretta Photography and Events)

“The Only Wonderful Things: The Creative Partnership of Willa Cather and Edith Lewis” and Homestead’s achievement will be celebrated with a virtual launch event April 1 at 7 p.m., featuring Homestead in conversation with colleague and novelist Timothy Schaffert.

The event, sponsored by the Cather Project and Department of English, will be held over Zoom. It is free for participants, but registration is required. Register at https://go.unl.edu/z5jw.

The conversation will bring the Cather scholar and Cather enthusiast perspectives together. Schaffert, author of “The Swan Gondola” and professor of English, is a native Nebraskan and Cather fan.

“His work is centered on queer themes and he is writing historical fiction right now,” Homestead said. “I think it will be a conversation for people interested in Tim’s fiction who are also interested in Willa Cather and learning about her life.”

Through meticulous research that depended heavily on previously unpublished documents kept in archives at Nebraska and elsewhere, Homestead, director of the Cather Project and professor of English, has reconstructed the life Cather and Lewis led together — a life previously erased by Cather scholars and fans.

“A lot of people found it inconvenient, essentially, for Edith Lewis to exist,” Homestead said. “They wanted to — from their perspective — protect Cather’s reputation.”

In the book, Homestead revisits some of their travels, including trips to the Southwest that inspired “The Professor’s House” and “Death to the Archbishop,” and writes about their professional partnership. Readers may be surprised to learn how much Lewis helped shape Cather’s work.

“They were collaborators in the production of Cather’s fiction,” Homestead said. “Cather did the writing in the first instance, but Edith Lewis edited her fiction and that editing often took the form of adding quite substantial language, while canceling Cather’s language. And then she also, I think, helped Cather to produce herself as an author and as a celebrity.”

Homestead also unpacks Cather’s death in 1947 and the effect it had on Lewis, as well as how the Cold War panic over homosexuality led to Lewis being sidelined by Cather scholars.

In addition to the virtual launch, the book will be previewed in a special event at 7 p.m. March 26, featuring a conversation between Homestead and Alex Ross, a writer with The New Yorker. The virtual event is being hosted by and is a fundraiser for the National Willa Cather Center in Red Cloud. There is a registration fee.