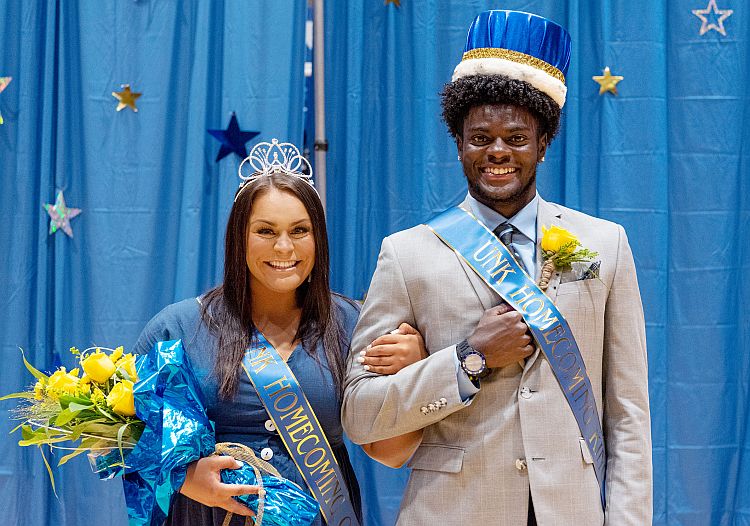 KEARNEY – Gabriel Amegatcher of Romeoville, Illinois, and Fayth Jackson of Lincoln are the University of Nebraska at Kearney’s homecoming king and queen.

They were crowned Thursday evening during a ceremony in the Health and Sports Center.

Amegatcher and Jackson were among eight finalists for UNK homecoming royalty selected by a student body vote. They will be recognized during the Loper Spirit March scheduled for 1 p.m. Saturday on campus and at halftime of the football scrimmage set for 3 p.m. Saturday at Cope Stadium.

A junior math major with a construction management minor, Amegatcher is a member of the UNK football team and vice president of the Student-Athlete Advisory Committee. He also serves as a success coach for younger players and is involved with Fellowship of Christian Athletes, UNK Men’s Project and the Black Student Association.

Amegatcher is active off campus through his volunteer work at New Life Church in Kearney.

Jackson is a senior social work major with a psychology minor. She’s active with Gamma Phi Beta, holding numerous positions within the sorority and serving as a Panhellenic recruitment counselor. Jackson is also a member of the UNK cheer team, serving as a captain last season, and she’s involved with TRIO Student Support Services and the Student-Athlete Advisory Committee.

In the community, Jackson volunteers with the TeamMates Mentoring Program, Girls on the Run, a nonprofit that encourages young girls to develop healthy lifestyles and positive self-esteem through weekly lessons and running activities, and The Arc of Buffalo County, which supports people with developmental disabilities. She’s also a hospice care companion.

Jackson plans to work as a middle school counselor.