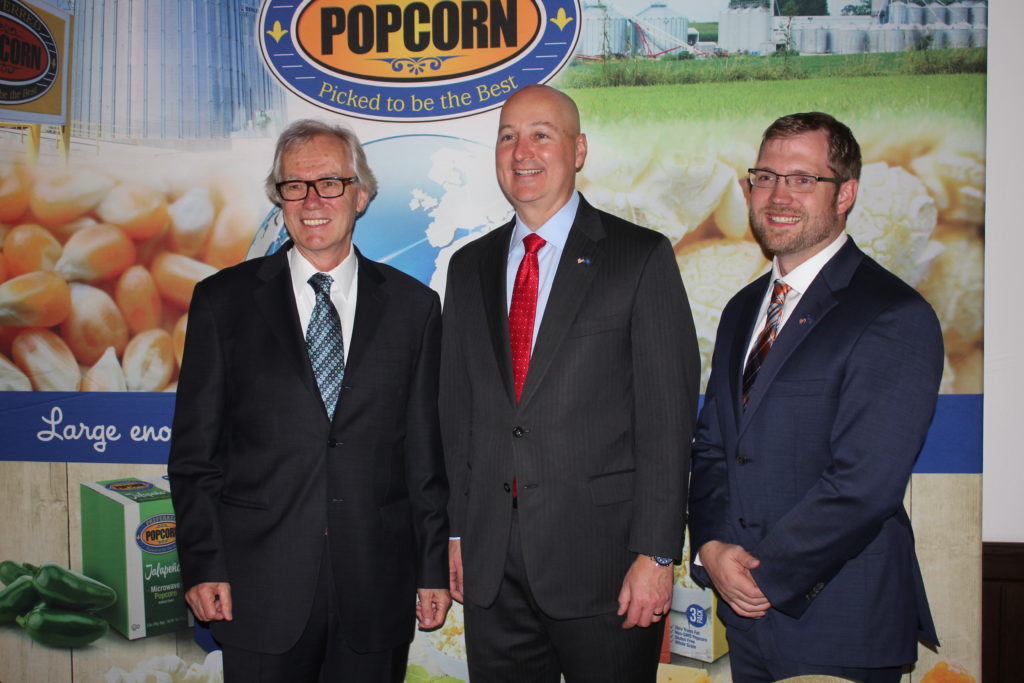 The first event during the Governor’s Trade Mission to Germany occurred Sunday night in Berlin when Preferred Popcorn of Chapman, Neb., signed a one-year renewable contract with Haase Food of Ober-Moerlen, Germany, to provide five kinds of popcorn for their movie theater and amusement park customers.

Helmut Haase, owner and CEO of Haase Food, noted they were pleased to continue their long established relationship with Preferred Popcorn. “Popcorn is our main product,” said Haase. “We bought popcorn from Indiana for many years, but then we met Norm (Krug) from Preferred Popcorn. The main reason for the move to purchasing popcorn from Nebraska is the quality of your popcorn. It has the popping expansion and taste our customers like.”

Sam Krug, general manager of Preferred Popcorn, noted their family traces their roots to Germany and that the contract signing was like coming full circle. “This goes back to the 1850s when my Great-great-grandfather Johannes and my Great-grandfather John came to the United States. Then my Grandfather Bob moved to Nebraska where they began to grow popcorn.

“In 1997 Dad (Norm Krug) and three other farmers joined together to establish Preferred Popcorn. Our first sale was an international one – going to Indonesia – and we now sell in 70 different countries,” said Krug.

They currently have more than 100 growers spread across seven states. One of their largest international markets is in Mexico where there are more than 15,000 retail outlets. They continue to expand their range of processing facilities across several states and earlier in 2019 the firm announced a $6 million dollar expansion that added 22,500 square feet to the company’s Chapman plant and more than doubled its operational capacity.

Krug noted the five varieties to be used by Haase’s firm include mushroom popcorn, which is a dense, fluffy type of popcorn; butterfly, white, organic and a new variety named Tiny Tot.

Governor Ricketts said at the signing, “This is a big deal. Preferred Popcorn has been with us on trade missions to China and Mexico and represents our great state by selling popcorn. Nebraska is the number one popcorn state in the nation.”

He added that 95 percent of the world’s consumers live outside the United States borders and since 35 percent of what is grown in Nebraska is exported it is vital the state continue to seek out new and expanding markets through trade missions such as the one to Germany.

The trade mission delegation will continue their meetings with German officials Monday (today) in both Berlin and Magdeburg. Tuesday they travel to Hannover to visit Agritechnica – the world’s largest farm show – where they will visit with four German manufacturers who have exhibits there and attend a machinery market seminar.

Wednesday through Friday the group moves to more meetings in Muenster, Loeningen, Essen, Harsewinkel and Düsseldorf where they will visit Graepel, Evonik Goldschmidt, Claas and Bayer. They return to Nebraska Saturday.