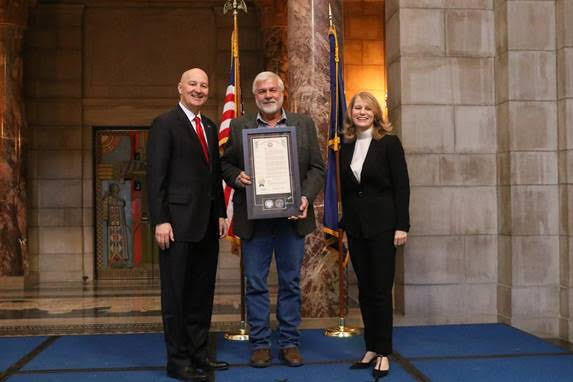 LINCOLN – Today, at a ceremony in the State Capitol Rotunda, Governor Pete Ricketts and First Lady Susanne Shore recognized several dozen heroes who helped save lives during the 2019 flooding.  They were joined by Major General Daryl L. Bohac—Adjutant General of the Nebraska Guard and Director of the Nebraska Emergency Management Agency (NEMA)—and NEMA Assistant Director Bryan Tuma to present the awards.

“As Susanne and I traveled the state in the aftermath of the most widespread natural disaster in our history, we heard heartwarming stories of ordinary Nebraskans doing extraordinary work,” said Gov. Ricketts.  “Nebraskans showed their strength, grit, and compassion in countless ways.  They rescued stranded neighbors and animals, sandbagged wells, donated hay and supplies, delivered hot meals, and raised funds for those who lost everything.  This State Capitol ceremony is the first of several ways we plan to honor heroes from the floods over the course of the next year.”

In June, the Governor and First Lady asked Nebraskans to submit nominations for the Flood Heroes honor.  Hundreds of nominations were received, detailing Nebraskans’ extraordinary compassion and bravery in service of their communities.  Among the state’s many Flood Heroes, those who took direct action to save the lives of others received their official honor at the Capitol.

“During the floods, Nebraskans rose to the challenge to protect their families and assist their neighbors,” First Lady Shore said.  “Many worked overtime, risked their personal safety, and generously contributed their time and money to give aid to their communities.  We have been inspired by the stories of these heroes in our midst.  I am grateful for the opportunity to give them official recognition for their service to our state.”

In March, blizzards and floods caused the most widespread natural disaster in Nebraska’s history.  The disaster claimed lives and caused billions of dollars in damages across the state.  Thousands of homes and businesses were lost.  Disaster declarations were issued in 84 counties, 104 cities and villages, and 5 tribes.

While many Nebraskans suffered losses from the flood, many more stepped up to help families and neighbors.  Across the state, Nebraskans immediately took action and displayed great courage, in some cases risking their own lives to save others.  An army of individuals volunteered to feed flood victims, rebuild homes, and help put lives back together.

James Wilke, a farmer from Columbus, was the first Flood Hero recognized at today’s ceremony.  James sacrificed his life while volunteering to save a stranded motorist.  When driving his tractor to aid a rescue attempt, the bridge he traveled over could not withstand the powerful water.  The bridge collapsed, and God called James home.  His mother Jan, wife Rachel, and children Julianne, Colton, and Addie accepted the award on his behalf.

The Governor and First Lady also presented an award to air crewmen and coordinators with the Nebraska National Guard.  From March 13th to April 13th, the Guard rescued 112 people (66 by hoist rescues) and saved 13 pets.  Many of these rescues took place in severe weather.  Pilots reported that the poor flying conditions during the Nebraska floods were worse than some of the experiences they had conducting missions in Iraq and Afghanistan.

A group of brave men from the Fremont area were also honored for their heroism.  On Thursday, March 14th, these first responders sprang into action after receiving urgent calls for help from a stranded family with a two-year-old girl living along the Elkhorn River.  With Highway 30 blocked by floodwaters, the seven rescuers volunteered for a waterborne rescue—using two of their own airboats.  Wind gusts of 40-50 miles per hour resulted in massive whitecaps, and the huge waves capsized the first boat.  The second boat also overturned as its crew tried to provide assistance.

With their boats sunk, the men contacted Fremont’s Fire Chief as they struggled to stay afloat in the freezing water and choppy waves.  In turn, he initiated a chain of communication that resulted in the Nebraska Army National Guard sending a Black Hawk helicopter from Columbus.  The chopper airlifted the men to Fremont Municipal Airport.  Upon landing, they were rushed to Methodist Fremont Health hospital to receive medical attention.  Their body temperatures were dangerously low from having been submerged in the icy water.  Thankfully, all seven men fully recovered, and—in true Nebraska fashion—they were soon back out performing more rescue missions.  Fremont’s Fire Chief nicknamed them “The Magnificent Seven” for their heroism. The family they had initially tried to rescue was eventually transported to safety by a Nebraska Game and Parks airboat.

At today’s ceremony, the following fire departments also received recognition for their courageous, lifesaving actions during the floods:

Other Fire Departments being honored, but unable to attend the ceremony include: