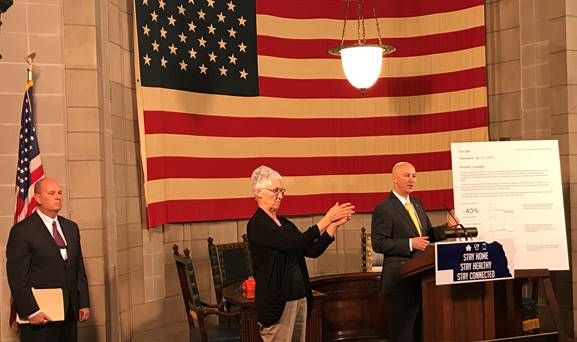 LINCOLN – This afternoon, at his daily press briefing, Governor Pete Ricketts reminded Nebraskans that today marks Day 1 of the “21 Days to Keep Nebraska Healthy” campaign.  He commended Nebraskans for complying with social distancing directives.  The Governor also shared social mobility data from Google that confirms Nebraskans have decreased their visits to places like stores, restaurants, and workplaces in the past weeks.  Additionally, Gov. Ricketts provided an update on the State’s procurement of personal protective equipment (PPE) like gloves and N95 masks.

The Governor also made clear that he has no plans to prematurely release inmates from State prisons during the pandemic.  Nebraska Department of Correctional Services (NDCS) Director Scott Frakes joined the Governor at today’s press conference.  He overviewed his agency’s efforts to protect the health of State teammates, inmates, and the public during the pandemic.

·       I want to remind people of our Six Rules to Keep Nebraska Healthy.

o  Socially distance your work.  Work from home or use the six-foot rule as much as possible in the workplace.

o  Shop alone and only shop once a week.  Do not take family with you.

o  Help seniors stay at home by shopping for them.  Do not visit long-term care facilities.

o  Exercise daily at home or with an appropriately socially-distanced activity.

·       In the media, we’ve seen a handful of advocacy groups attempt to exploit the pandemic to achieve political goals.

o  It’s happening in calls for all-mail elections, the Green New Deal, and other things at the national level.

o  In Nebraska, we’re seeing this happen with groups who have been calling for early release of inmates for decades.

·       Let me be very clear: No matter how often advocacy groups call for premature releases, we are not going to let inmates out of prison early in Nebraska.

·       We already have a lower rate of incarceration than any surrounding state.

·       Early release of inmates would not only be a public safety risk, but it would also compound the challenges communities are already facing in fighting the pandemic.

o  Many inmates will receive far better healthcare in prison than they would get if suddenly returned to the community.

·       “The push for early release of inmates is completely inconsistent with the primary goal of corrections: that people learn best not to engage in crime because they do not want to face the consequence of the crime, and the consequence of crime is incarceration.  The goal of reducing overcrowding in prisons is important, of course, but the way to reduce overcrowding in prisons is to build additional prison facilities to provide adequate space for those whose actions require them to be incarcerated.  Nebraska does not have adequate prison space, and already has among the lowest incarceration rates in the nation.  We need to build more prison capacity.“

·       “Public safety is the priority here, and the early release of inmates to the streets presents a direct threat to that public safety.  Criminals need to understand that when a judge gives them a sentence, they are going to serve the full sentence given.  Early release of inmates is just a band-aid on a more serious problem.  It is well known that we don’t have enough prison capacity for the inmates we have, let alone any increase in crime that inevitably will occur.  The answer to that problem is to bring Nebraska’s number of prison beds up to a level that is suited to the size of its population and crime.”

·       We’re releasing individuals into society at a challenging time for them to find work.  More than ever, we have to do all we can to equip them with the tools to be successful upon reentry.

·       We’re following CDC guidelines to ensure the health of everyone in the corrections system.

o  Early on, we implemented visitor and staff screening.  Within a few days, we halted visitation in the interest of public health.

o  We now have digital temperature reading equipment.  We’ll use it to take the temperatures of all staff members, contractors, and others who enter our facilities and office buildings.

o  We’ve put together a quarantine approach for those entering our system.  We perform medical screening for all new arrivals, and we conduct health checks twice daily for 14 days prior to integrating newcomers into the general population.

o  We’ve secured PPE to meet our needs, including masks for staff and inmates to use.

o  We have ongoing communications to staff and inmate population.

§  We have a daily phone call with all of the wardens.

§  We use social media to make materials accessible to family members.

§  We have signage throughout our facilities with health and hygiene reminders.

o  We’ve continued to offer programming, and to provide opportunities for work and exercise, while looking out for the health and safety of teammates and inmates.

o  We’ve doubled phone time for inmates so that they can keep in touch with family at a time when visitation is unsafe.

o  We have great access to community health care.

o  We’re offering greater access to health care than many, if not most, citizens have right now.

·       Teammates at NDCS have been doing tremendous work in this situation.  They’ve been flexible and responded well as policies change in response to the virus.

·       We’ve done an excellent job keeping COVID-19 out of our prisons, and we’re not going to let up on our efforts.

·       We continue to work to secure more PPE and other materials.