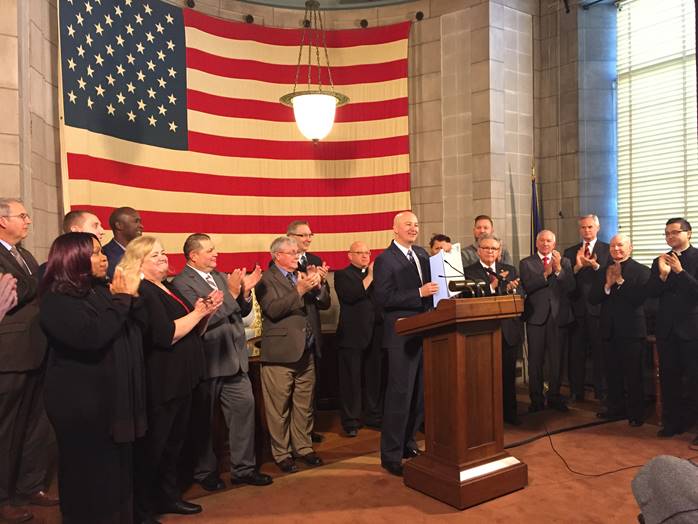 Lincoln, Ne. — On Tuesday, Governor Ricketts signed a proclamation declaring January 16, 2018 as “Religious Freedom Day” in recognition of America’s tradition of religious freedom.  Governor Ricketts was joined at the ceremony by representatives from the Nebraska Family Alliance, Nebraska Catholic Conference, Nebraska Chapter of the Congressional Prayer Caucus, and Nebraska religious leaders.  Religious Freedom Day is observed nationwide on January 16th, which is the anniversary of the 1786 passage of the Virginia Statute of Religious Freedom.

“The right to religious freedom is a foundation block of America’s historical roots,” says Governor Ricketts’ proclamation.  “Our Founding Fathers knew the importance of freedom of religion for a stable democracy, and our Constitution protects individuals’ rights to worship as they choose.”

The First Amendment of the United States Constitution reads: “Congress shall make no law respecting an establishment of religion, or prohibiting the free exercise thereof; or abridging the freedom of speech, or of the press; or the right of the people peaceably to assemble, and to petition the government for a redress of grievances.”

“We are grateful to promote and celebrate today our most cherished of American freedoms – the freedom of religion,” said Tom Venzor, executive director of the Nebraska Catholic Conference.  “Religious liberty empowers us as citizens to seek truth and justice freely and charges our elected officials with the noble task to govern for the common good.  Together, with the Catholic Bishops in Nebraska, we pray that this precious freedom will be upheld in our state and nation.”

“Religious liberty is one of the principles on which this country was founded,” said Karen Bowling, executive director of the Nebraska Family Alliance.  “This pre-political human right guarantees your ability to live and work according to your beliefs.  Nebraska Family Alliance is proud to stand alongside Governor Ricketts today in support of this irreplaceable American freedom.”

While Americans are free to practice religion, many around the world do not have the same liberty.  In 2017, more than 130 Christians were killed in Egypt for their faith.  Hundreds of thousands of Rohingya Muslims have fled Myanmar since August of 2017 due to persecution.  In North Korea, citizens are mandated to worship the ruling Kim family.

More information regarding Religious Freedom Day can be found at www.ReligiousFreedomDay.com