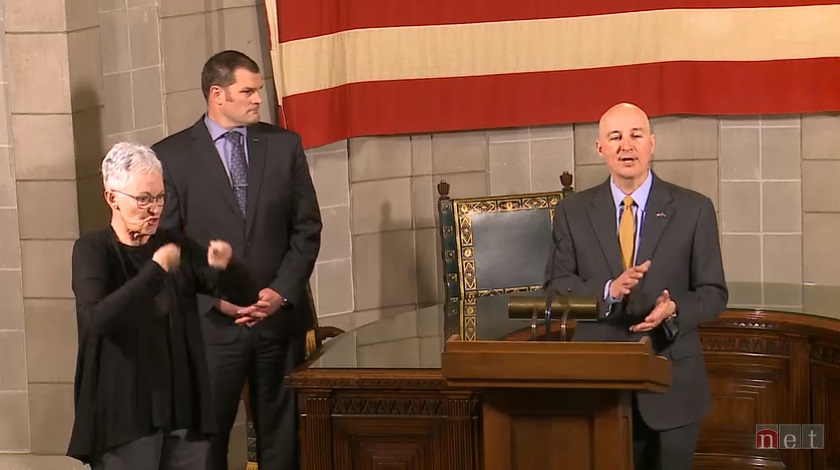 This afternoon, Governor Pete Ricketts provided Nebraskans with an update on COVID-19 and its impact on Nebraska.

He began by commending Nebraskans for practicing social distancing and following the “ten person rule.”

Ricketts next announced that Nebraska will be following federal guidelines of extending the tax filing deadline until July 15, however noted that it’s still important for Nebraskans to file by the regular April 15 deadline if at all possible.

The governor also wanted to take a moment to dispel rumors that have been circulating.

Next, Jason Jackson took to the podium. He is the Director of Nebraska Administrative Services, and emphasized the importance of businesses having a continuity plan in place.

Governor Ricketts then elaborated on Jackson’s comments on the importance of having a continuity plan.

Todd Becker with Green Plains Inc., an ethanol company based in Omaha talked about what they’re doing in response to the COVID-19 pandemic.

The governor then began fielding questions from the media. The first addressed the possibility of using NU dormitories for quarantine space.

Rural Radio News then inquired on what parents can do in the wake of schools being closed for such prolonged times in regard to childcare for their kids if they’re unable to take time off from work.

Staying on the topic of the Nebraska Legislature, Ricketts then said that property tax relief for Nebraskans will likely be on hold given the current state.

Jason Jackson then fielded a question regarding potential unemployed people and possible fits within the State Department of Corrections.

The following question Ricketts fielded was whether or not Nebraska would be issuing stay at home orders.

The governor then touted Nebraska’s ability to stay ahead of the curve due to proactive social distancing efforts.

He next fielded a follow up question about the ethanol industry shipping industrial alcohol to the NDOC to produce hand sanitizer; and whether or not inmates would be compensated for their work.

The next question was whether or not Nebraska would be issuing travel  bans.

Ricketts was then asked if he had any inkling on when the curve will flatten.

The following question addressed the State of Nebraska having paid employees being on call. Both Jackson and Ricketts addressed the matter and said it could be something local businesses implement as well.

Ricketts also told media members that the Department of Labor has nearly doubled the amount of people handling phone calls, but due to the high volume of calls, wait times have been lengthy.

Ricketts next addressed what small Nebraska businesses can do in these uncertain times.

And as far as individuals who are self employed….

The next question was in reference to evictions, and what, if anything, the state was going to do to protect tenants who may be unable to pay their rent during these uncertain times.

Ricketts was then asked his thoughts on the proposed federal stimulus package that is in the works on Capitol Hill.

He concluded Monday’s media briefing on a positive note, saying that we as Nebraskans will see this through.