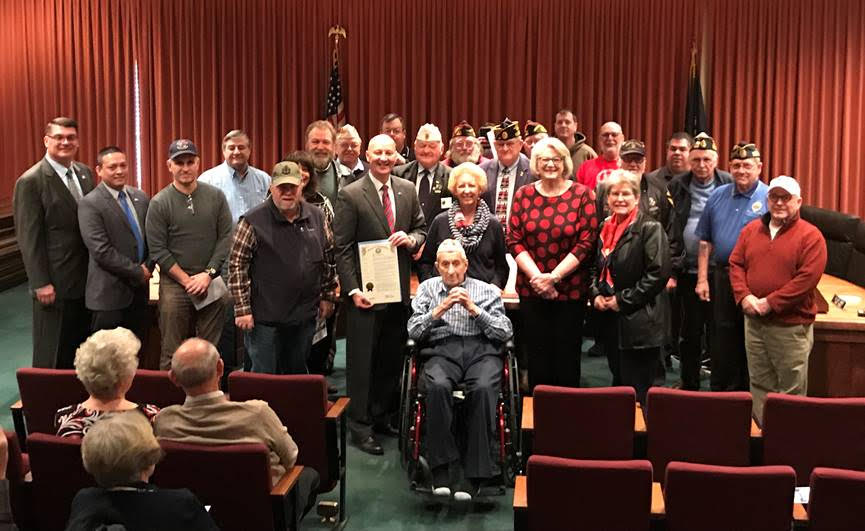 “Today we recognized and remembered the Nebraskans who were present during the attack on Pearl Harbor,” said Gov. Ricketts.  “Some of these heroes lost their lives in the attack, while others went on to fight in World War II.  We also recognized the family members who carry the memory and legacy of their parents’ and grandparents’ actions.  Preserving the history of Pearl Harbor is important, and it’s why we celebrate Remembrance Day.”

Ed Guthrie was an electrician mate on the USS Whitney, docked in Pearl Harbor the day of the attack on December 7, 1941.  He was sitting on the deck of his ship reading when the attack began.  Afterwards, he spent three days picking up survivors and bodies from the water.  He went on to serve on the USS Banner and to participate in the atomic bomb tests at Bikini Atoll.  He was discharged from the Navy after six years and returned to Omaha where he was an electrician at OPPD for 34 years.

“The motto of the Sons and Daughters of Pearl Harbor Survivors is ‘Lest We Forget,’ which affirms our commitment to keep alive the memory of the surprise attack on Pearl Harbor that Sunday morning 78 years ago,” said Nancy Tonkin, president of the Nebraska chapter of SDPHS.  “We remember the brave military personnel who perished, along with the many survivors, and ask you to join us in keeping their legacy and our memories of them alive.”

SDPHS is made up of descendants of military personnel who were stationed at military installations at Pearl Harbor and elsewhere on the island of Oahu, Hawaii.  Its goal is to inspire others to learn about and document the beginning of World War II.  SDPHS also preserves the history of the attack, particularly the stories of those who were there.  The organization has over 4,000 members worldwide.

“While it has been nearly 80 years since the attack on Pearl Harbor and few of the survivors are still with us, our collective memory hasn’t faded,” said NDVA Director John Hilgert.  “Those who died at Pearl Harbor still serve to this day.  They serve as symbols of vigilance, reminding us forever to keep watch.  Today’s ceremony was a reminder that we will never forget them.”

The attack on Pearl Harbor, which launched the United States into World War II, took place 78 years ago and claimed the lives of over 2,400 Americans, including civilians.

Flags are to be flown at half-staff on Saturday, December 7th in remembrance of Pearl Harbor.  Citizens are also encouraged to observe appropriate ceremonies and activities in appreciation of the sacrifices of those who served in World War II.