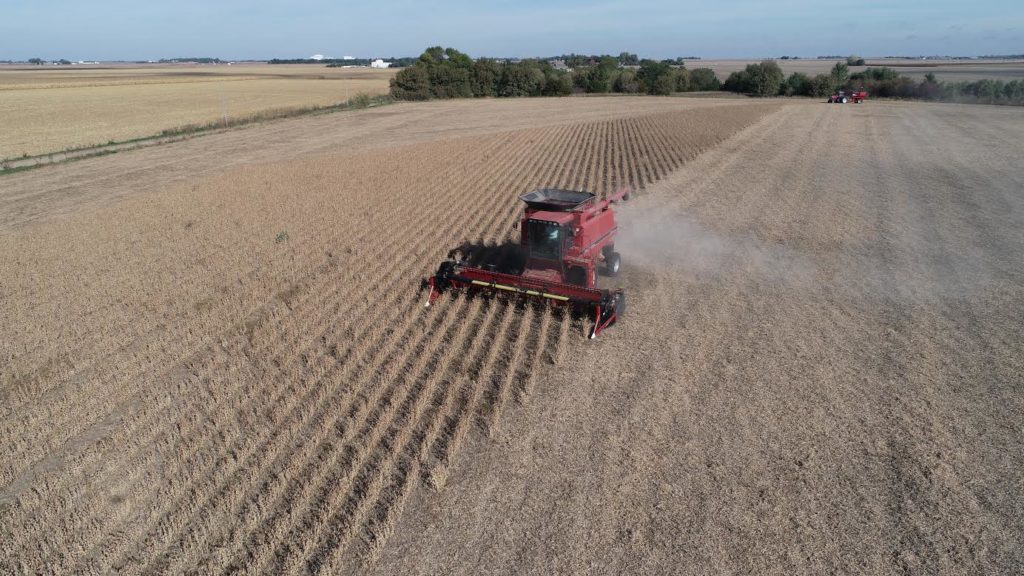 Cover Crops Make All the Difference

On a windy autumn day, Dan Leininger, a water conservationist with the Upper Big Blue Natural Resources District, stands in a field of ripe soybeans on the northeast side of York. The crop at the Project GROW demonstration plot is thigh-high, the rows of fuzzy bean pods a muted golden brown. Leininger pulls a pod from a plant and pops it open to reveal three perfectly shaped milky white ovals. “These are ready to cut, ready to combine. They’re dry enough,” he says, rolling the beans around his palm speculatively. These tiny, egg-shaped legumes will soon be shipped around the nation and the world as food products, oil, or biodiesel. It’s a field of possibilities, ready to harvest.

While the beans are impressive, Leininger gets down on one knee to show what he’s most proud of. “See this?” he says, pointing to a smattering of small holes where something has burrowed into the soft, rich earth. He gathers a few clumps of what appears to be soil. “Do you know what this is?” he grins, holding them up. “This is earthworm castings. In other words, earthworm poop!” The earthworms are both indicators and agents of a healthy soil system, he explains.

“These worms can burrow down to six feet and as they come back up, will ingest soil and dead plant matter. Their castings are very fertile.” The worms offer a double benefit: in addition to enriching soil with their natural fertilizer, their tunnels break up the soil, keeping it loose and aerated—the ideal growing conditions for crops. The tunnels make the soil more porous, like a sponge. That’s never been more important in Nebraska than in 2019, when flooding has threatened the livelihood of many farmers. “If you have healthy soil, that’s a huge buffer of protection against weather extremes, because your soil can take in more moisture and it can hold that moisture longer for your crop….Healthy soil is really an advantage when it comes to variabilities in weather.”

The key to developing this healthy soil full of earthworms and other beneficial organisms is no-till farming practices and cover crops, says Leininger. A cover crop is a plant that is sown not to be harvested and sold, but to remain on the ground and benefit the soil in myriad ways. It may be planted immediately after a cash crop is harvested or sown between the rows of a cash crop while it’s growing. The environmental nonprofit The Nature Conservancy recently gave the Upper Big Blue NRD a highboy interseeder, a piece of equipment specifically designed to plant cover crops in between rows of a standing crop. The interseeder will allow the NRD to continue to be leaders in conserving and protecting the natural resources of the district while demonstrating sustainable agricultural practices. It will be used on the 160 acres at Project GROW as well as demonstration farmland managed by the Nature Conservancy and farmers in the area.

The NRD will use the interseeder for research as well as demonstrations, testing what seed mixes work best in different growing conditions to see if interseeding is a viable option for district growers.

“These beans aren’t RoundUp ready, they don’t have any kind of treatment on them,” explains Leininger, noting that cover crops provide natural weed and insect control. “These are just regular soybeans, and we do get a premium for those. We can grow non-GMO beans because of the use of cover crops and crop rotation.” On the Project GROW demonstration fields, one is growing soybeans and the other is growing corn. Next year, rye will be planted as the cash crop on the current soybean field and soybeans will be planted on the current corn field. This multicrop rotation is essential to keeping the soil healthy, as well as for weed and pest suppression.

“Mother Nature loves diversity,” Leininger says. “It’s healthier for the whole system. When you fight against nature by only growing one crop year after year, it’s expensive. Your inputs will be higher every year, because you’ll be developing resistant weeds and insects and depleting the soil.”

Leininger picks up a handful of dried biomass that lines the ground between rows of soybeans. It’s triticale, a wheatlike plant, the cover crop planted last year after harvest. The triticale provided benefit to the soil while it was growing as it sequestered excess nitrogen in the soil to prevent it from leaching into the groundwater. A year later, it’s still working, as now it protects the soil from erosion and provides nutrition and cover for earthworms and other microorganisms as it decomposes.

“With cover crops you always have a living root in the soil,” adds Leininger. “The plant harvests sunlight—free energy—and through photosynthesis it makes plant sugars that get transported into the plant roots. When it’s down in the roots, the roots will exude carbon into the soil, and carbon is the building block of all living material. So what the cover crops do is take advantage of the sunlight throughout the year to put carbon into the soil.”

Project GROW (Growing Rotational crops on Wellfields) began in 2017 as an effort to improve the soil health on the York wellfield—the land that sits above the part of the aquifer that provides water for much of the community. Improving the soil will also improve the water quality from this source. Using sustainable practices including no-till, diverse cover crops, and crop rotations, the Project GROW fields are demonstrating how ag producers can improve soil health, decrease soil erosion, and improve water holding capacity on their land, all while maintaining profitability.

There have been cover crops in use at the Project GROW fields since 2018. After just one year, Leininger says there was a noticeable improvement in the soil. Both fields showed signs of increased biological activity and test samples from the cornfield showed that there was very little residual nitrogen in the soil (only two parts per million), meaning that there was not a significant amount that could leach into the groundwater supply. Soil improvement at greater depths (like 20 feet) may take a number of years to be seen, says Leininger.

“One of the goals of Project GROW is to show how you can make a profit in farming using less inputs if your soil is healthy,” said Leininger, drawing a distinction between maximum yield and maximum profit. While you may have a greater yield using RoundUp ready seeds and spraying your fields for weeds and other pests, the expenses are also higher. It’s counterintuitive, but depending on the conditions, growing less (with fewer inputs) can deliver greater profit because it’s more cost effective.

Cover cropping is a scalable practice, insists Leininger. It’s as good for a backyard garden as it is for a several thousand-acre farm. “It’s beneficial for any size of operation.” More than simply beneficial, it’s necessary. “Long term sustainability and profitability in agriculture depends on more diversification when it comes to what we plant,” he says. If we plant only one or two crops and use only commercial fertilizer, herbicides, and insecticides, we will create more resistant pests and weeds, which will in turn demand ever costlier inputs.