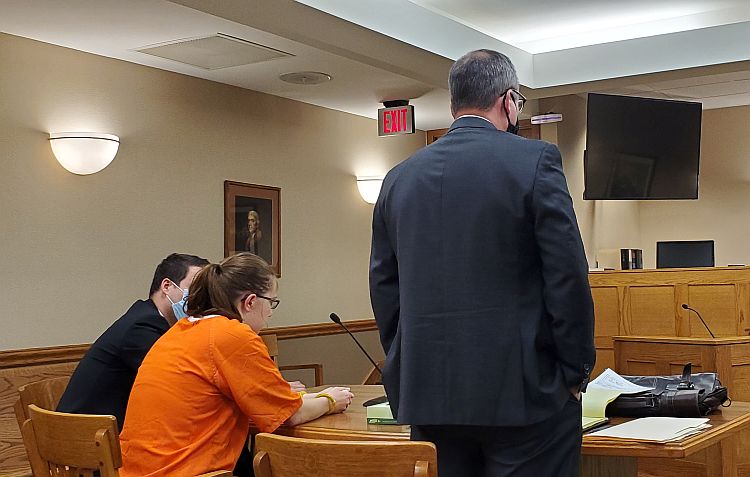 A hearing was convened in Dawson County Court Wednesday morning to consider a request by 31-year-old Kathleen Jourdan to have a bond set in her 2nd Degree Murder case. The Omaha woman is charged in the shooting death of her husband, 35-year-old Joshua Jourdan inside a pickup along Interstate 80 near Cozad on June 17th. Kathleen also faces a charge of Use of a Weapon to Commit a Felony.

At the hearing, Defense Attorney Brian Davis signaled their intention to present self-defense in the case. He said “based on the recent incident that happened very quickly, unfortunately I think there’s going to be a self-defense argument based on a number of incidents over a number of years and during their eight-year marriage.” Davis added that he did not believe Jourdan was a risk to the public describing the case as an isolated incident involving a relationship and “that abuse had occurred in that relationship over a long period of time” that “eventually culminated in a tragic event.” He asked that a reasonable bond be set in her case and suggested it be at $100,000.

Davis said that while Jourdan is a native of the state of Washington, she attended medical school in Grenada for two years before finishing the final two years of medical school in the state of Georgia. She then arrived in Omaha in June 2019 to participate in a rural residency program of the University of Nebraska Medical Center. Jourdan was in the process of moving to Scottsbluff to complete her medical residency program.

Dawson County Attorney Elizabeth Waterman said she believed Jourdan exercised “incredibly poor judgment”. Waterman questioned whether Jourdan would be a safe person to be out of custody “if an educated woman with income and independence and abilities would flip out and take the action that she did in the spur of the moment in front of her own children!”

The Jourdan’s two children were in the back seat during the shooting. Joshua Jourdan was in the driver’s seat and Kathleen was in the front passenger seat according to a Nebraska State Patrol report. The children have been placed into protective custody with the Nebraska Department of Health and Human Services. Waterman asked for a bond of not less than $1 Million based on the 2nd Degree Murder charge.

In the end, Dawson County Judge Wightman noted the weight of the 2nd Degree Murder charge which carries a penalty of up to life in prison. He then set her bond at $1 Million but, Jourdan could be released from custody if 10% is posted.

Kathleen Jourdan’s next court appearance is set for July 2, 2020 at 8:30am in Dawson County Court for preliminary hearing.