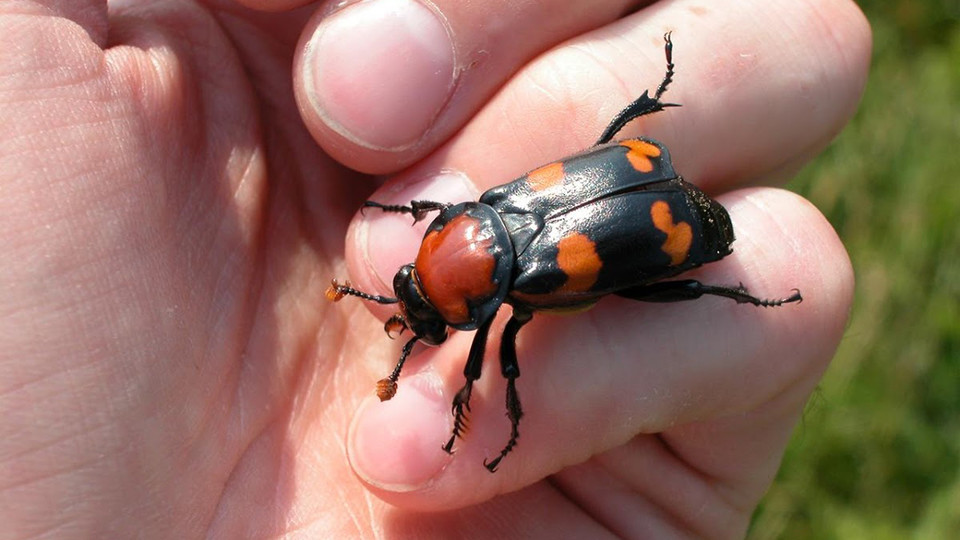 Lincoln, Nebraska, May 28, 2019 — Agronomy and horticulture graduate student Alison Ludwig describes the subject of her research as simultaneously interesting, creepy and charismatic.

Through a partnership with the National Research Traineeship Program, Ludwig is studying the American burying beetle — a nocturnal insect that survives on dead animals, works hard to build a home for its family and shares child care with its mate until its offspring can fend for themselves.

Nurturing insect behaviors like the latter are normally found only in bees, wasps, termites and ants, but the American burying beetle is rare in more ways than one.

The federal government has listed the species as endangered since 1989. Although the beetle used to inhabit the eastern half of the United States, it now lives mainly in Nebraska, Oklahoma and isolated pockets of land, such as a remote island in the Atlantic.

“I think a lot of people don’t even know they are here,” Ludwig said. “The beetles aren’t found outside North America, so Nebraska has one of the biggest remaining populations in the world.”

Ludwig had never heard of the beetle until she searched for master’s programs related to fire ecology and discovered professor Dirac Twidwell, who was seeking a student to examine the effects of prescribed burns and other environmental factors on the insect.

“The fire aspect of this research is what got me to sign on,” Ludwig said. “But as I read more about the beetle, I thought, ‘This is a really cool insect.’ It has a complicated life cycle most insects don’t have.”

The beetle meets its mate at the carcass of a small animal like a bird or mouse, and the two join forces to fight off other insects and take control of the carcass. At 30 to 35 millimeters long, the beetle is what Ludwig calls a “gladiator,” capable of overpowering most insect competitors.

After laying claim to a carcass, the conquering pair use their mandibles to shave off the dead animal’s fur or feathers and secrete substances over it as a preservative. They then dig three to 20 centimeters into the ground to bury the dead animal.

As they remove dirt beneath the carcass, it lowers into the ground and compresses into a ball. The female constructs a smaller chamber above this brood chamber and lays 10 to 30 eggs in it.

The larvae hatch in a few days, and both beetles stick around to feed them.

“They’re kind of like birds,” Ludwig said. “They will predigest the carrion and give it to their babies.”

These caregiving behaviors have endeared her to the beetles, transcending their penchant for barbering and embalming other animals.

“To me, it’s really charismatic,” Ludwig said. “I know for some people it might not be charismatic because of the whole dead stuff and whatnot, but I think they’re pretty neat.”

This summer, Ludwig is helping the Nebraska Game and Parks Commission survey the beetles in the Loess Canyons south of North Platte. For five consecutive evenings in August, they will place carrion in buckets in the ground, check the buckets the next morning for the beetles, count and tag any beetles found and release them.

“Since fires are commonly prescribed in the area, the land managers and Nebraska Game and Parks Commission would like to find out whether the fires are helping, hurting or not affecting the beetles,” Ludwig said.

Her research interest is broader, looking at how the spread of red cedars and other land uses may also affect the beetles.

After she earns her master’s degree, Ludwig aims to continue a career path in ecology, primarily working with wildfires and prescribed burns. She still has mixed feelings about working with beetles.

“The feeling of the legs squirming against your fingers still kind of creeps me out a bit,” Ludwig said. “Part of me is like ‘ew,’ and the other part is like, ‘This is cool.’”

Her feelings about working with other insects are not mixed.

“I definitely don’t like anything to do with spiders,” Ludwig said.

So, if Nebraska adds a spider to the endangered species list, can we give her a call?

She shakes her head. “I probably couldn’t be of much help.”