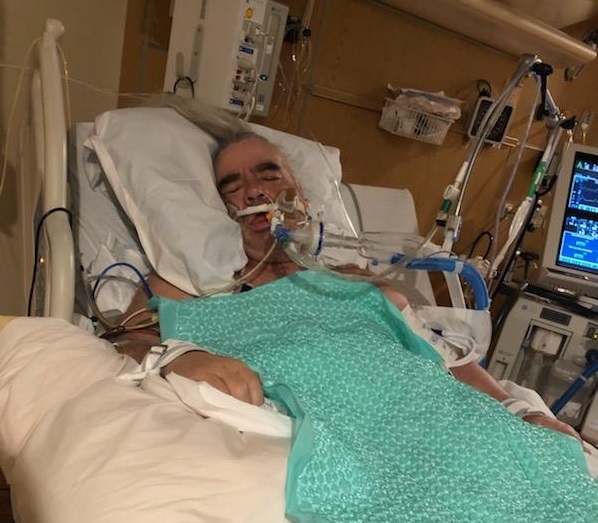 John was hospitalized 17 days at Regional West Medical Center for COVID-19, 11 of them hooked up to a ventilator.

Before contracting COVID-19, 55-year old Kimball resident John Aguiniga was the picture of health and vitality.

“I was never sick and had never spent a day in the hospital,” he said. “I thought I was invincible.”

What began as a headache and slight fever while John and his wife Jennifer were house hunting in northern Colorado and planning for their upcoming move, soon escalated to flu-like symptoms. He tested negative for influenza at the Kimball Health Services clinic on March 23, but was not tested for COVID-19 since his symptoms at the time didn’t fit into the rapidly changing national requirements for testing. By March 28, he was experiencing increased shortness of breath, high fever, and an oxygen level of 85, far below the normal range of 95 to 100. Jennifer raced John to Regional West Medical Center in Scottsbluff, where he became the hospital’s first COVID-19 patient.

Jennifer, a certified nursing assistant (CNA) for over 18 years, knew the severity of the situation but wasn’t prepared for the rapid chain of events when they reached the hospital’s Emergency Department. She said a quick goodbye as John was wheeled away, not realizing that she wouldn’t see her husband again until April 14.

Brennan Mosch, MD, hospitalist at Regional West Physicians Clinic-Hospitalist Service, was one of the physicians caring for John during his hospitalization.

“In medicine, we’re used to years of thorough research and controlled studies to know how to treat disease,” said Dr. Mosch. “Because this is a new virus, unfortunately there is still no tried and true treatment.”

John remembers being sedated prior to being hooked up to a ventilator that afternoon, but has no recollection of the following 11 days as physicians fought to save his life while a ventilator tube kept him alive by pumping air into his lungs.

Physicians first tried a combination of hydroxycloriquine and zithromax, knowing that some COVID-19 patients respond favorably to the drugs. John’s condition, however, continued to worsen, and he began experiencing what’s called a cytokine storm, a well-recognized occurrence where the body’s immune system becomes overzealous and damages healthy cells, causing severe respiratory distress and eventual shutdown of multiple organs

In the meantime, Jennifer tested positive for COVID-19, despite having almost no symptoms, except for light fatigue. She isolated herself in their Kimball home for the next 14 days, where family and church friends delivered meals and support from a distance. Even though he couldn’t see them, Jennifer sent text messages and videos to John’s phone every day. For comfort, she made a poster photo collage for her bedroom, and a friend of the family made one for John’s hospital room. They hoped it would be the first thing he saw when he woke up.

“Fourteen days is a long time to pace and stare at the walls,” she said, “Not being able to be with John was heartbreaking.”

As John’s condition deteriorated, Dr. Mosch had the difficult task of preparing Jennifer to make end of life decisions for her husband.

“He was basically on the brink of death; we knew he would die if we didn’t do something in the next day or two,” said Dr. Mosch.

He consulted with Joseph Hong, MD, and Saed Awadallah, MD, pulmonologists at Regional West Physicians Clinic-Pulmonology, Critical Care, who had a suggestion. Dr. Hong had been researching case reports of an experimental medication called tocilizumab (actemra). Typically used in the U.S. to treat rheumatoid arthritis, it had been selectively implemented with some success in China and Italy to treat critical COVID-19 patients by modulating the immune system.

“We monitored his lab work very closely,” said Dr. Mosch. “Every day after that, I was able to call his wife and give her good news. We couldn’t have written a better scenario for a full recovery.”

John began the slow but steady road back to health. He remembers a nurse giving him a small can of pop his first day off the ventilator and being too weak to hold it on his own. His healthy 225-pound frame had shrunk to 190 pounds. There were joys, though – surprising Jennifer with a FaceTime call after waking up, and being moved out of ICU into a 3rd floor hospital room. Physical therapists worked with John daily as he took his first tentative steps with a walker and gradually regained strength.

He started hearing the word ‘miracle’ associated with his recovery and realized how fortunate he’d been. A church-going man and believer in God before his illness, John said he now has an even deeper connection to God and is exploring the possibility of working in ministry.

After John returned home, he and Jennifer sent flowers to Regional West’s ICU and 3rd floor, wishing they could have thanked everyone in person who had cared for John.

“I’m just so glad to be alive and am in awe of the doctors and nurses at Regional West,” John said. “They were all so kind to me. I could feel their compassion, even from behind their masks and face shields. They looked me in the eye as they spoke to me. I am so grateful to them for the care I received. For saving my life.”

On April 14, John walked out of Regional West, breathing on his own with no supplemental oxygen. Church and community members held a parade past his house when he got home. Food now tastes “almost too good” and he’s already gained back eight pounds. After things settle down, he and Jennifer look forward to their move to northern Colorado and being closer to their children and grandchildren.

For caregivers like Dr. Hong, seeing recovery in such an ill patient is immensely satisfying, given the newness of the disease and the experimental nature of treatment.

“Don’t take COVID-19 lightly,” he said. “If you show signs and symptoms, contact your primary care provider. Be vigilant. Healthy people like John don’t realize how quickly this disease can escalate.”

Stressing the need for social distancing, Dr. Mosch added, “Asymptomatic people are going shopping, to the grocery store, and to family gatherings, not knowing that they’re positive for COVID-19. That’s how it’s spreading.”

John’s advice? “Be careful. Stay home. Wear a mask. This disease is real – it doesn’t discriminate.”