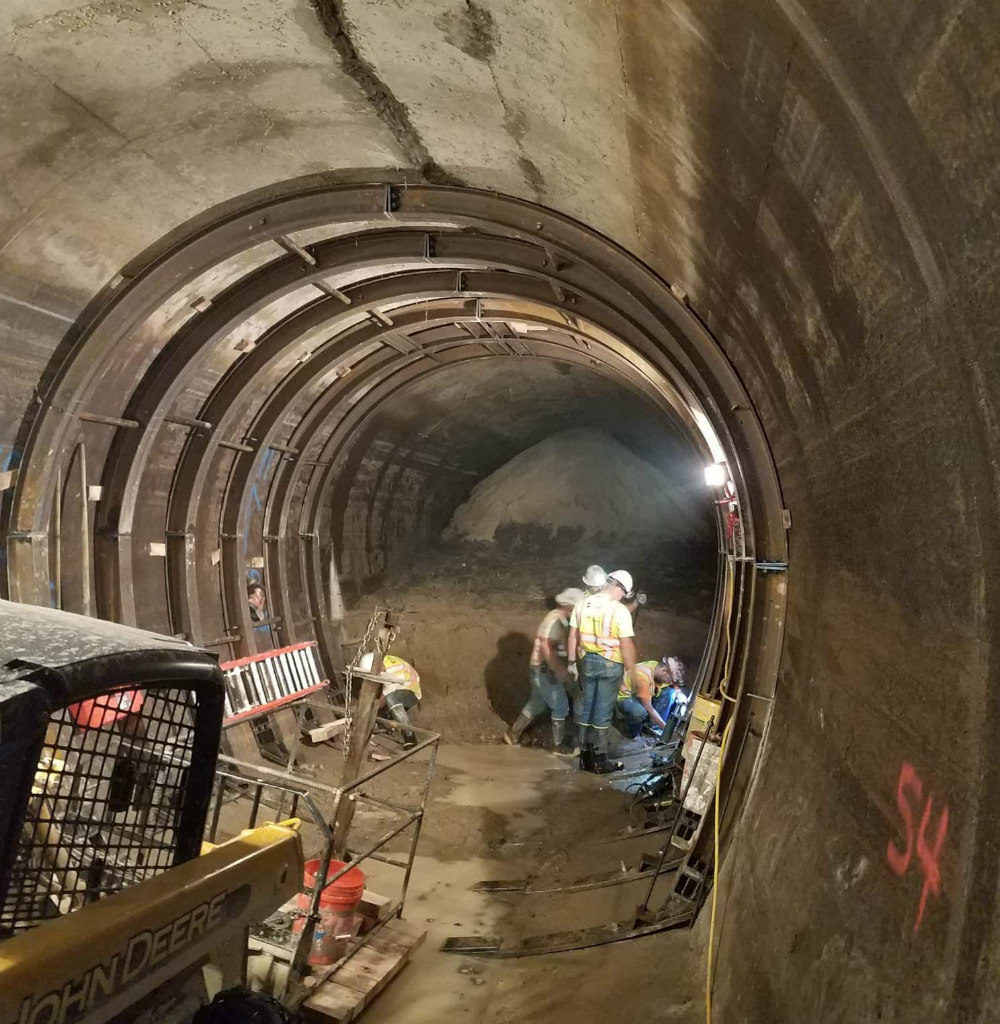 Inside the #2 tunnel of the Ft. Laramie Canal in Wyoming, at the first collapse. Courtesy Photo

The Gering Ft. Laramie District updated constituents on the construction at the Ft. Laramie Canal on Monday, Aug. 12, at the UNL Panhandle Research and Extension Center in Scottsbluff.

The work on the canal wall breach is complete and ready for when the tunnel work is complete.

SAK Construction has passed the first tunnel collapse and is now nearing the second tunnel collapse. The construction business has three crews working 24/7, with five workers in the tunnel at a time and the other three outside making sure air and supplies get to them.

Rick Preston district manager of the GFLD said the second tunnel collapse could be a problem.

“If they get there and it’s not just the ceiling that has fallen through, but the sidewalls, we will move onto a permanent fix,” he said. “He (contractor) believes the collapse is eight foot wide.”

If the walls have collapsed, there is not enough time, before the irrigation season is over to patch them. Plus, water moving through the tunnel without concrete walls will push the sand and debris with it compounding problems downstream.

Preston was quick to add the work, already done, will go towards both a temporary fix and a permanent one.

“We’re not spinning our wheels on a temporary fix,” he said. “Everything we do applies to the future of a permanent fix.”

The Goshen and Gering Ft. Laramie Districts are also getting a request together for the Bureau of Reclamation for financial assistance on a temporary and permanent fix.

“They (Bureau) have worked with other agencies and have scraped together $4 million to help,” said Preston. “What’s not there we’ll have to come up to pay the rest.”

Congressman Adrian Smith was also at the meeting. He said he’d like to see things resolved with as little financial impact to the area as possible.

“I’m glad restoration is taking place, and things are moving along,” Smith said. “The issue is still not resolved.”

He added he’s been talking with the Bureau of Reclamation, USDA, and the Risk Management Agency since crop insurance is among the main concerns for farmers affected.

“We want to make sure we can access as many resources as we can,” Smith said.

If the tunnel is repaired and water returns this month. Preston said he might ask the Bureau to extend the irrigation season.

The extra days would help farmers maybe plant some grains for forage or finish off a crop.

Preston said the irrigation districts would know more on the tunnel situation by the end of the week.