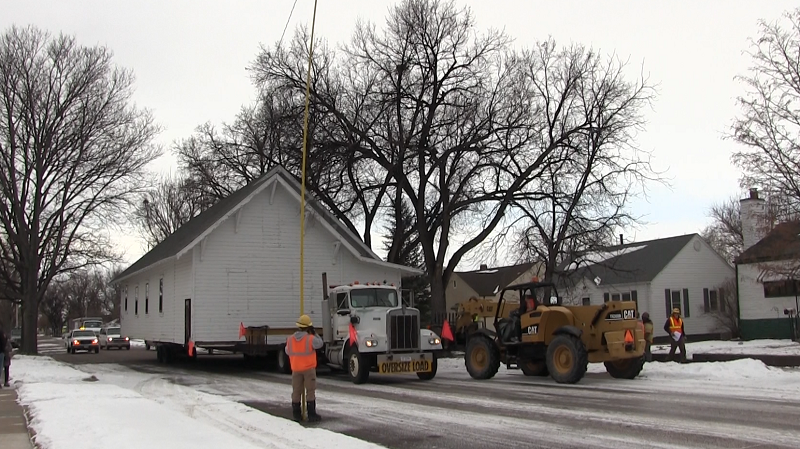 Slowly and methodically, the structure known as Japanese Hall has been moving Tuesday from it’s historic location near the intersection of Railway and Avenue C in Scottsbluff to the Legacy of the Plains Museum in Gering.

Starting shortly after 8 a.m., the move was hampered somewhat by vehicles parked on Avenue C as the truck carrying the hall made it’s way to 27th Street, and it had just reached the North Platte River bridge on Highway 92 shortly after noon. The remainder of the trek would take the structure on  Old Oregon Trail Road, past the Scotts Bluff National Monument and then to its new permanent home.

Vickie Sakurada-Schaepler, coordinator for the project, tells Rural Radio News moving day has been very exciting for the entire organization. “There are so many wonderful stories of the support that the Japanese, and Japanese-Americans, have received from the Scottsbluff area and throughout Nebraska,” says Sakurada-Schaepler. “It’s just a wonderful history, and that’s the reason we need to preserve it.”

Museum Director Dave Wolf says Japanese Hall will make an excellent addition to the Legacy of the Plains, contributing to visitor’s understanding of the impact Japanese residents of the valley had on agriculture and the culture, society and economy of the Nebraska Panhandle.

All told, the move was anticipated to take most of the day for the building to reach its’ new location in Gering.