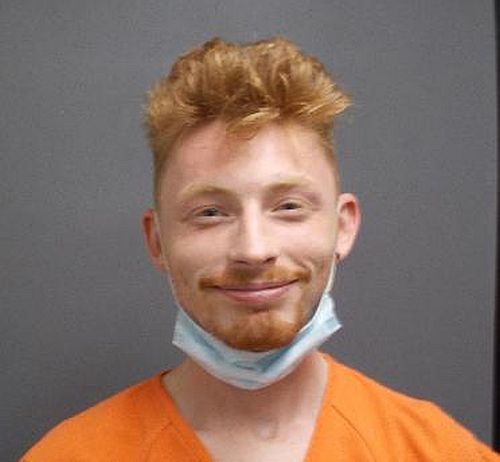 JULY 23, 2020 (NORTH PLATTE, NEB.)  — Troopers with the Nebraska State Patrol (NSP) and Custer County Sheriff’s Deputies have arrested a driver who fled from a traffic stop on foot.

At approximately 8:40 p.m. Wednesday, a trooper observed a Nissan Sentra fail to stop at a stop sign at the intersection of Victoria Springs and Gates Road north of Broken Bow in Custer County.

During the traffic stop, a Custer County Sheriff’s Office K9 detected the odor of a controlled substance in the vehicle. As troopers performed a search of the vehicle, the driver fled on foot into a cornfield. A passenger in the vehicle remained at the scene.

The Custer County K9 and an NSP K9 performed a track of the subject and were able to locate the subject in a nearby river less than an hour later. The subject, Jacob Funson, 22, of Sioux Falls, South Dakota, was taken into custody without further incident. The search of the vehicle revealed less than one pound of marijuana, THC edibles and shatter, and a handgun.

Funson was arrested for fleeing to avoid arrest, obstructing a peace officer, possession of marijuana – over an ounce and less than a pound, possession of drug paraphernalia, carrying a concealed weapon, and possession of a controlled substance. Funson was lodged in Custer County Jail. The passenger was cited and released.