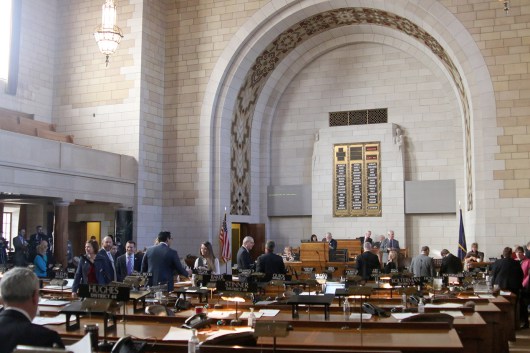 With the hammer of the COVID-19 pandemic coming down hard on Nebraska and the rest of the United States March 9-13, the Nebraska Legislature is trying to figure out what the coming weeks will look like.

At a press conference at the Nebraska State Capitol Friday morning, Gov. Pete Ricketts said there are 13 reported cases of COVID-19 in Nebraska. Events of all kinds across the state have already been canceled or indefinitely postponed in efforts to stop the further spread of the virus.

Ricketts also said at the Friday morning press conference that Nebraska schools could close for six to eight weeks if the coronavirus reaches community spread.

The Legislature is in recess for four days until it is scheduled to return to session March 17, but the Speaker of the Legislature Jim Scheer reserves the right to suspend the session at a moment’s notice depending on new information and updates, according to Patrick O’Donnell, clerk of the Legislature.

“I know that he (Scheer) is talking to a variety of health officials and other legislators,” he said. “He will just be making the best, informed decision he can about whether it makes sense for us to come back into session next week.”

The Capitol already restricted access to public areas of the building, O’Donnell said, including the viewing balcony above the Legislative Chamber and hearing rooms, in an effort to protect the public, lawmakers and their staff.

“Those are the big, visible things you would see if you were here,” he said.

O’Donnell said they are also encouraging legislators and their staff who feel sick to self-quarantine and get a screening test if they came in contact with someone or went someplace with connections to COVID-19.

“We haven’t seen a lot of that yet,” he said, “but we are aware of those kinds of things.”

For now, the legislative schedule still appears to be intact, but O’Donnell said with more information and updates, that schedule is subject to change.

“Right now, I’d say we are going to be in session Tuesday,” he said. “But it won’t surprise me at all if we don’t end up canceling for a week or two or three.”